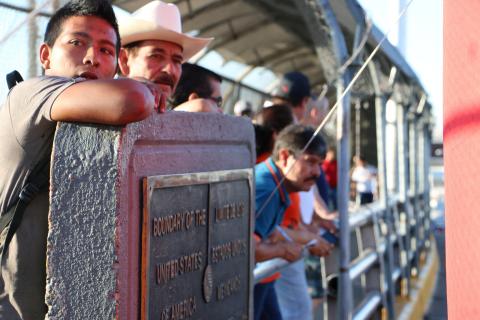 On November 5, in response to President Trump’s announcement that he intends to block access to asylum for all vulnerable families who cross between ports of entry and indefinitely detain migrant families, 570 faith leaders and 145 faith-based organizations across traditions delivered a letter to all members of Congress denouncing these proposed illegal policies and expressing unequivocal support for the caravan of people seeking protection from violence in Central America.

As 570 faith leaders and 145 faith-based organizations across traditions, we write to express our unequivocal support for the caravan of people seeking protection from violence in Central America, as well as our categorical opposition to the administration’s ban on asylum seekers on the southern border and violates our moral and legal obligations to those fleeing violence and persecution. These families are fleeing violence, desperation, and persecution and are traveling together for safety on their dangerous journey. As the caravan of people seeking protection continues on their long journey to the United States, the administration is responding to a humanitarian crisis by separating and incarcerating families, detaining and prosecuting parents, turning away asylum seekers, and deploying the military in border communities. We call on Congress to reverse course and see that the U.S. complies with its own laws and international obligations to welcome those seeking protection.

The U.S. must stop facilitating displacement and should partner in remedying root causes of forced migration. Faith groups have reported high levels of displacement in Honduras due to escalating violence and an increased lack of trust in government institutions since the 2017 election. A lack of progress on anti-corruption efforts, the unavailability of medicine in the public healthcare system, and continued corruption within the police and military compound the violence that Hondurans face - which drives individuals to seek safety where they can find it, including the United States. The administration cut off a key path to protection in the United States for Central American children by ending the Central American Minors (CAM) Program. Abandoning nearly 7,000 children and their parents who were seeking protection in the U.S. through the program left many in danger and with no option but to flee in search of safety. Furthermore, U.S. policies have helped fuel abuse against migrants in Mexico by criminal organizations and corrupt Mexican migration and security agents, and these crimes are almost never properly investigated or punished. Remedying the root causes of dangerous conditions and ensuring due process for peoples seeking protection should be our first priority.

It is a human right to seek asylum. As people of faith we affirm this right, and urge the administration and all members of Congress to do the same. The United States cannot legally reject asylum seekers based on the possibility that they could potentially seek asylum in Mexico. While community members and humanitarian organizations in Mexico are prepared to welcome those traveling as part of the migrant caravan, many caravan members will be unable to pursue safety in Mexico. These crimes are almost never properly investigated or punished. People fleeing violence in Central America must be offered a safe harbor, not illegally turned away or criminalized for seeking protection.

We oppose using the plight of migrants, children, and families as leverage to enact dangerous policies. We call on Congress not exploit a humanitarian crisis to end child welfare protections or expand immigrant detention. As the faith community we will not be swayed by crass and cynical tactics to fuel fear driven policies. The caravan does not represent a massive influx of individuals to the country. Even with the latest figures, border crossings remain at historic lows compared to past decades. The United States has an orderly asylum system and is capable of processing protection claims by caravan members and all individuals who claim asylum.

Asylum seekers, families, and children should never be separated or locked up. We urge Congress and the administration to utilize non-restrictive, community-based alternatives to detention (ATDs) as the most appropriate response for families, children, and asylum seekers. Protections for children should be upheld, including the Flores Settlement agreement which mandates that children are not kept in unlicensed detention or restrictive settings for more than 20 days. This is an important standard, and undermining protections for children is not a solution.

Congress has an opportunity to reverse course by limiting funding for detention, deportation, and border militarization. As Congress considers funding for the remainder of FY 2019, we call on Congress to instead increase accountability and oversight of the Department of Homeland Security (DHS). Pouring more money into the machinery of deportation and detention will not solve an outdated, punitive immigration system. It will not address the root causes of forced migration. Additional oversight is essential to ensure adherence to international and U.S. law for asylum and human rights protection in immigration detention and enforcement.

Our faith traditions teach and call us to welcome the stranger, stand with the vulnerable, and love our neighbor. Respecting the right to seek safety without fearing punishment must be protected in policy. Instead of continuing unnecessary and immoral detention, deportation, and dangerous border policies, we must carry on our nation’s proud history of hospitality and moral leadership. We call on you and the administration to respect the principles of family unity and liberty in its immigration and border enforcement policies.

To see the list of signatories, which includes the Maryknoll Office for Global Concerns, download the 17-page PDF version.

Photo: People standing on the the bridge at the international boundary between El Paso, Texas and Ciudad Juárez, Mexico in 2016. Photo by U.S. Custom and Border Protection and available in the public domain.

Faith leaders letter to Congress on the migrant caravan