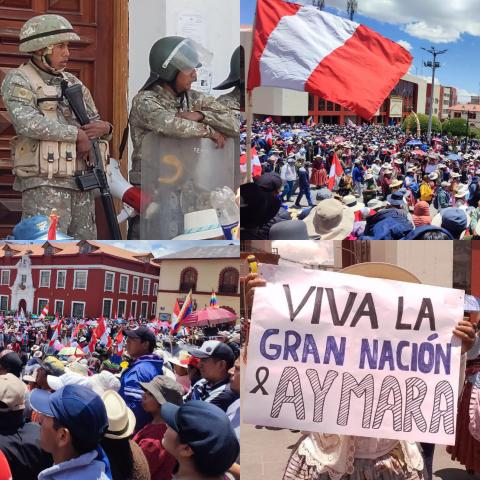 Human rights organizations and church leaders have condemned the massacre of 17 Peruvians at the hands of indiscriminate use of force by state security on Monday.

Large crowds converged in the southern region of Puno early Monday morning, January 9, to protest the arrest of former President Pedro Castillo after he took steps last December to abolish Congress in what some Peruvians interpret as an act of rebellion and others as a defense against efforts to depose him.

Castillo’s former vice president Dina Boluarte was sworn in as president and promptly declared a state of emergency, ordering the military to the streets to control protest. Monday’s violence brings the national death toll to 47 since Castillo’s ouster.

The Peruvian Bishops Conference has issued a statement in which they “profoundly condemn the death of 17 fellow Peruvians as well as the civilian and police injuries in the Department of Puno which occurred today in the context of clashes during the development of citizen protests.

"We regret that these events have occurred due to the distortion of the right to protest…and we also regret the excessive use of force. Both situations are reprehensible and in both situations those responsible must be identified promptly.”

The human rights organization DHUMA, led by Sister Pat Ryan “What happened in the city of Juliaca and Puno can only be described as one of the worst massacres that have occurred in our country in recent years. We reiterate that it is not up to the National Police of Peru or the Peruvian Armed Forces to resolve the conflicts that have been taking place. It is the duty of the central government and the Congress of the Republic to find a realistic, nonviolent solution within a reasonable time that will restore tranquility and peace to the country.”

Executive Secretary of the National Human Rights Coordinator of Peru, Jennie Dador, cited the "indiscriminate use of force" by state security forces as responsible for the deaths. "What happened yesterday was really a massacre.”

Photos of the Puno demonstrations from Sr Pat Ryan, MM