Joint Letter to President Biden on Remain in Mexico 2.0 and Title 42 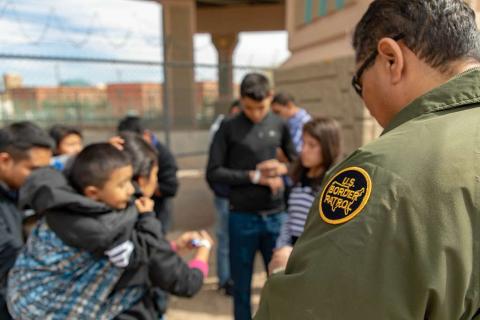 The Maryknoll Office for Global Concerns and more than 240 organizations sent the following letter to President Joe Biden and Vice President Kamala Harris.

We, the undersigned 242 organizations, write in dismay at the administration’s decision to expand the Remain in Mexico policy and deploy it in tandem with Title 42 in order to turn away to danger families and individuals who are seeking safety in the United States. Nearly eleven months since taking office, this administration continues to violate U.S. asylum law and evade U.S. treaty obligations by blocking and returning asylum seekers to places where their lives and safety are in peril. We urge the administration to terminate these harmful, illegal policies and ensure that people fleeing persecution and torture can request asylum and other protections at the border, including at ports of entry.

Despite repeated statements decrying Remain in Mexico as dangerous and inhumane – and issuing memoranda to terminate it – this administration has inexplicably and unconscionably chosen to expand Remain in Mexico beyond the scope of it under the prior administration. Now, non-Mexican migrants and asylum seekers from any country in the Western Hemisphere are subject to forced returns to danger in Mexico, including Haitians, who often face targeted antiBlack violence and discrimination there. The first implementation of Remain in Mexico led to massive human rights violations with more than 1,500 reported killings, kidnappings, rapes, torture, and other violent attacks against people returned to Mexico. There is no reason to believe this time will be different. As the union representing USCIS asylum officers and more than 50 former Immigration Judges and Members of the Board of Immigration Appeals have made clear, this deadly program cannot be implemented safely, humanely, or in compliance with U.S. law.

The decision earlier this month to renew the Title 42 order issued by the Centers for Disease Control and Prevention (CDC) for another 60 days and use this unjustifiable policy in conjunction with Remain in Mexico to block, return, and expel people seeking asylum in the United States to danger is gravely concerning. There is no public health justification for continuing to bar people seeking protection at the border, as senior CDC scientists and other public health experts, including Dr. Fauci, have repeatedly explained to Congress and the public.

Continuing to turn away asylum seekers is particularly galling, as vaccinated tourists and shoppers with visas are now permitted to cross the southern border while people in search of refuge are turned away at U.S. ports of entry. Human rights organizations have documented more than 7,600 reported kidnappings and attacks against people blocked in or expelled to Mexico under Title 42. In addition, the U.S. government continues to expel families and adults to Haiti, despite warnings by the Department of Homeland Security’s internal civil rights watchdog that such expulsions risked civil and human rights violations and the opinion of a former senior State Department official which confirmed that such expulsions violate U.S. obligations to not expel or return individuals who fear persecution, death, or torture. Nothing prevents this administration from immediately halting the use of Title 42 to block and expel asylum seekers to danger.

As President Biden recently reaffirmed, reinforcing respect for human rights is not only in the national security interest but “rights-respecting democracies are more peaceful, prosperous, and stable.” We urge the administration to immediately stop inflicting violence on people seeking safety in our country by permanently ending these policies and restoring the core human right of access to asylum in compliance with U.S. and international refugee laws.