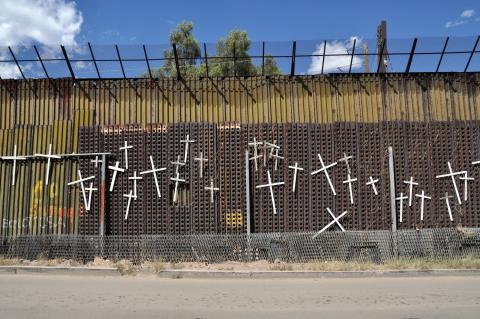 The Maryknoll Office for Global Concerns issued the following statement on April 1, 2022, in response to the decision from the CDC and Biden administration to end Title 42 on May 23.

Read the statement as a PDF.

Today, April 1, the Centers for Disease Control (CDC) and the Biden administration announced plans to terminate the use of the Title 42 health policy to expel migrants and asylum seekers at the U.S.-Mexico border.

“We are relieved to hear that the Biden administration finally plans to end Title 42 expulsions,” said Susan Gunn, Director of the Maryknoll Office for Global Concerns. “We pray this decision is part of a larger effort to restore the asylum system to allow fair processing of migrants and asylum seekers.”

The Trump administration introduced the use of Title 42 two years ago and it has since been continued by the Biden administration. The policy allowed border authorities to carry out about 1.7 million expulsions of migrants and asylum seekers at the Southern border in violation of international law and protocols which require due process for asylum claims. This has led to migrants being returned to situations of extreme danger. For two years, the Maryknoll Office for Global Concerns has joined public health experts, immigrant advocates, faith leaders, and Members of Congress in calling for an end to this policy, citing the serious harm it causes to migrants and the data indicating its inefficacy in preventing the spread of COVID-19.

“The asylum seekers arriving at our Southern border are precious children of God with unalienable human dignity,” Gunn continued. “Forced to make impossible decisions to protect their families, they have been ignored for too long. We call for robust support for border communities that will be the first responders as Title 42 is wound down and for a wider network of welcome for migrants in asylum proceedings throughout the country. We call for attention to the root causes of migration so that families have the choice to stay home. In the migrant, we hear the voice of Jesus saying, ‘I was a stranger, and you welcomed me.’”