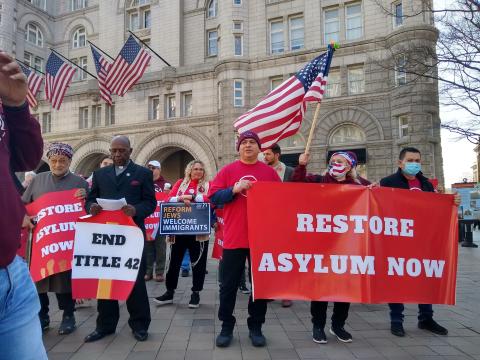 On May 4, over 1200 Catholic sisters sent a letter to President Biden urging him to follow through on his commitment to end Title 42 on May 23. Maryknoll sisters were among the signatories.

Read the letter as a PDF.

We write to you today as Catholic sisters united in commitment to the Gospel of Christ, which inspires us to seek justice and peace for all, particularly those who are rejected and oppressed. We extend greetings of peace to you during this Easter season, in which Christ’s resurrection gives us renewed hope.

As people of faith committed to honoring the inherent dignity of all people and seeking justice for migrants, we thank you for your commitment to end Title 42 expulsions at the U.S. border. After two years of consistent advocacy against this expulsion policy, we joined immigrant advocates and public health experts in rejoicing at the April 1 announcement of the planned end of Title 42 expulsions on May 23. As we know from our own experience accompanying migrants, asylum seekers come to our border in search of safety for themselves and their children, just as many of our ancestors did.

Now, however, we are aware of the response from others in the Administration and some members of Congress who are working to maintain Title 42 expulsions, citing exaggerated concerns about an overwhelmed border. We are disturbed by these efforts, which appear to have motivations other than the common good. We urge you to resist their calls to continue this unjust and unnecessary policy

Many members of our congregations have witnessed firsthand the impacts of the misuse of the Title 42 health policy to expel migrants at the border without due process or consideration of their asylum claims. The policy has led to approximately 1.7 million rapid expulsions of migrants since its inception. Since the start of your administration, human rights groups have documented nearly 10,000 incidents of kidnapping, torture, rape, and other violent attacks against vulnerable migrants expelled under Title 42. Expulsions under Title 42 risk returning asylum seekers to the persecution from which they fled, a move illegal under international law. The use of the policy, in conjunction with other Trump-era border deterrence policies, has led to a severely weakened asylum system, now on the brink of collapse.

The continued misuse of Title 42 fails to respect the dignity of migrants and refugees and to honor the image of God in every human person. In addition to the catastrophic impact this policy has on individuals and families, it sends a message that perpetuates fear of the “other,” and discourages decision makers at every level of government in our country from legislating and crafting policy with human dignity at its core.

While several state leaders and members of Congress claim that Title 42 is necessary to maintain control at the border, immigration policy experts reiterate that Title 42 was a temporary health policy – not an immigration policy – that has been misused and is now outdated. Low COVID-19 case rates have led the federal government and states to relax pandemic restrictions to the extent that such rapid expulsions are especially unwarranted. Even at the height of the pandemic, public health and international migration experts at the United Nations spoke out against the Title 42 policy, stating that it was possible to receive migrants safely while honoring the legal right to seek asylum.

We are particularly concerned about the inconsistent and even discriminatory manner in which Title 42 has been applied. Migrants of some nationalities have been expelled at far greater rates than others. We have seen how Black migrants have been disproportionately targeted for expulsion under Title 42. The well-documented manner in which Ukrainian asylum seekers are being admitted and welcomed at the Southern border, as well as the manner in which asylum seekers were welcomed in when your Administration suspended the “Remain in Mexico” policy in January 2021, demonstrates that the U.S. government is fully capable of coordinating a robust humanitarian response to an influx of immigrants when the political need and will are present.

Our Catholic partners at the border, including Catholic sisters working at migrant reception centers, are committed to working with the federal government to create such a humane, well-managed system of reception for migrants seeking asylum at our border. In addition, our faith-based and secular partners in the interior of the country are ready and eager to welcome and accompany asylum seekers in all stages of the reception process.

Our faith calls us to seek justice and welcome the newcomer even when it is difficult. In light of the values that lie at the heart of our shared Catholic faith and the principles that are dear to our nation, we urge you to end Title 42 on May 23 and to restore the asylum system as soon as possible for the sake of our immigrant brothers and sisters and the well-being of the “soul of our nation.” Let us always seek to be a nation of welcome, a people of faith and conscience, committed to the common good.