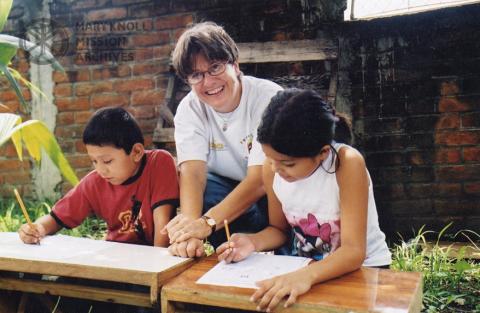 Debbie Northern, a Maryknoll lay missioner in El Paso, Texas, reflects on the Christian call to seek justice for all who are oppressed.

Both the first reading and the Gospel reading speak about the promise of resurrection. In the first reading, belief in a life beyond this one gives the persecuted family courage and hope to stand up to the oppressor. One of the brothers says: “You are depriving us of the present life, but the King of the world will raise us up to live again forever.”

The family chose to die rather than to defy God’s law and bow to human laws. The story isn’t really about a specific dietary law, i.e. eating pork, but rather it is about the injustice of a law specifically calculated to make the Jewish people choose between following their religion or not. Whenever a government or institution makes a discriminatory law or rule, whether it be targeting a person’s religion, race, ethnicity, sex, or sexual orientation, it is unjust and contravenes the law of God that tells us to respect and love our neighbors.

Throughout the ages many saints have exemplified courage and faithfulness by choosing prison, torture or even death to stand up to injustice and tyranny. Their faith and belief in the resurrection which Jesus talks about in the Gospel, give the prophets, martyrs and all of us the strength to follow God’s will, no matter the consequences.

However, this is not an easy decision. Most of us do not challenge injustice publicly, but instead we are more passive, signing petitions, voting, or perhaps going to protests once or twice. But to make systemic change and speak truth to power, we need to do more or things will not change.

Some examples of those who have been willing to do this are Dr. Martin Luther King, Jr., Sr. Dorothy Stang, and Malala Yousafzai. They were willing to take risks to ensure future generations would be able to have more opportunities and better lives.

Working on the U.S.-Mexico border, I often hear the rhetoric that says migrants who wish to come to the United States are “criminals” and a menace. Assisting in the shelters, where we offer migrants food, clothing and temporary housing, I have heard their stories of fleeing violence and persecution. The migrants only desire a safe haven for themselves and their families; they want to create a new, peaceful life.

Unfortunately, since 2019, it has been virtually impossible to seek asylum at the border due to regulations known as the Migrant Protections Protocols and, since 2020, the Title 42 public health rule. According to U.S. and international law, migrants have the right to ask for asylum on U.S. territory, but they have been denied that right because of these rules and regulations.

In some states, it is even illegal to leave food and water in the desert for migrants to find while traveling through the harsh terrain. Hundreds of migrants die each year trying to reach the U.S. border. As Christians, we are called to feed the hungry, give drink to the thirsty, and clothe the naked. Even if human law says that helping migrants is wrong, we must defy unjust and harmful laws to do as God want us to do to preserve and foster life.

In today’s Gospel reading, Jesus responds to a hypothetical challenge to the belief in the resurrection. The story parallels the first reading where there are seven brothers who are persecuted and give their lives, confident of eternal life. In the Gospel reading, there are seven brothers who have the same wife and no offspring, and the Sadducees want to know whose wife she will be in the afterlife. Jesus’ response makes clear that the afterlife will not resemble our current realities. We don’t have to know exactly what awaits us, we just need to have faith that God’s promise of eternal life is true and live our lives accordingly in the here and now, bringing about peace and justice to resurrect our communities and nations.

How are we, as Christians, to challenge and change institutions and governments, including the Catholic Church, that are hindered by sins of racism, sexism and nationalism which go against God’s law to love our neighbor? Who are some of the martyrs and saints who inspire us to stand up to injustice and to live our faith courageously as resurrected people?