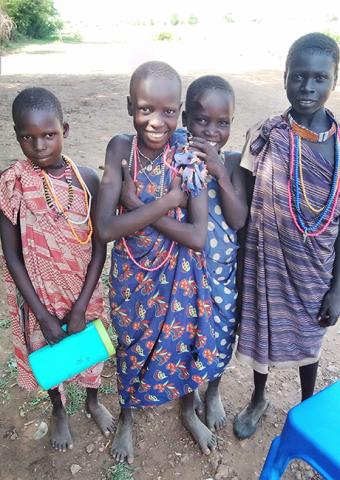 As half a million people in South Sudan face their third straight year of extreme flooding that the UN says is fueled by climate change, Maryknoll lay missioner Gabe Hurrish writes in his newsletter about the growing hunger and violence in the world’s youngest nation. This article was published in the November-December 2021 issue of NewsNotes.

As I have mentioned in my previous communication, violence continues across South Sudan. Most recently, in a high-profile killing, two Catholic Sisters and three others were ambushed along a highly traveled road (see trucker strike below). This is terrible but not uncommon in this virulent country. So many murders are occurring every day. The United Nations has reported that most of it is committed by armed militias who are supposed to protect their communities but instead turn on them.

Security forces are becoming more and more onerous, and both journalists and human rights activists are being harassed, arrested and disappeared. Just on September 1, security authorities in South Sudan arrested two activists amid claims that they were among individuals behind a planned demonstration to call for the ouster of President Salva Kiir. Most people are never seen are heard from again after they have been arrested by the feared security apparatus. This is the kind of situation that the southern Sudanese people fought against for over 50 years under Arabic northern rule.

Politically, even Vice President Riek Machar was reportedly kicked out as leader of his party, which highlights divisions within the opposition. The government army and the opposition armies are turning on themselves and killing their own men! They are not paid, not fed, not clothed, and they have heavy weapons with nothing to lose. So this is a big problem. I wonder who controls these young men? A recent United Nations Mission in South Sudan (UN MISS) report stated that the violence is growing and they do not have the resources to mitigate every incident. One would think, with an annual budget of $1.6 billion, they would be able to do a comprehensive job.

The World Food Program (WFP) here has run low on cash and has announced it has to suspend food deliveries. So even the United Nations doesn’t have enough resources to save lives. Almost 400,000 people suffer from floods and have no food.

According to WFP, 60% of this country suffer from food insecurity. That is to say, they don’t have enough food year round or have high risk of losing their crops. Sixty Percent!!! Just for awareness to put it a bit in perspective: That is roughly equivalent to all of the 12 most populated states in the USA combined: California, Texas, Florida, New York, Pennsylvania, Illinois, Ohio, Georgia, North Carolina, Michigan, New Jersey, and Virginia. Comparable to all those states not having enough to eat … for a year!

Due to an influx of IMF dollars, the exchange rate on the black market dropped by roughly 33%. Ostensibly this was to stabilize the failing economy, but market prices did not concurrently decline, so many people lost a lot of purchasing power. At the same time, prices of imports have increased due to an international trucker strike. This has caused food and fuel prices to rise sharply. The strike was started because the South Sudan government would not provide safety for truck drivers who were being killed weekly while driving on the main highways from Kenya and Uganda.

Many people are now looking at the failed state of South Sudan, and of course the United States invested billions in this country — with, in the end, not much to show for it. There are many similarities between the Afghanistan situation and the situation here in South Sudan — as far as investing lots of money, resources and time and finding in the end a failed state.

The security apparatus in the country seems to be gaining more and more influence, with less and less control from politicians. Media personnel are being arrested and harassed and lawyers and human rights activists rounded up and disappeared.

So the situation here is not good. People are suffering. Crime and violence are increasing. It is not an easy place to live and work. We continue to pray for a change of heart amongst those who are in control. Too many lives are senselessly lost. Thank you for your support and prayers.

Faith in Action: All are invited by Friends in Solidarity with South Sudan for an evening with world-renowned author John Grisham on Wednesday, Nov. 10 at 8 p.m. Eastern. John will talk with Sister Joan Mumaw, IHM, about his new novel "Sooley” which tells the fictional story of a 17-year-old South Sudanese basketball player and the experiences of his family in South Sudan. The webinar is free, but registration is required.
https://bit.ly/SooleyWebinar After Nov. 10, look for the recording of the webinar on their website
https://www.solidarityfriends.org/