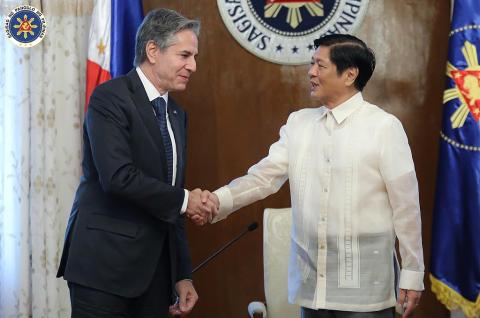 Members of Congress and human rights activists raised concerns leading up to U.S. Secretary of State Antony Blinken meeting with Philippine President Ferdinand Marcos, Jr. The following article was published in the September-October 2022 issue of NewsNotes.

Without mentioning documented harassment of journalists, red-tagging of religious and labor leaders, and or killings by police and military forces, Blinken described the U.S. relationship with the Philippines as “extraordinary” and said the United States stands ready to work with Pres. Marcos in areas of defense, climate change and controlling the COVID-19 pandemic.

The requirements include that U.S. agencies certify that they have “investigated and successfully prosecuted members of the PNP who have violated human rights” and “established that the PNP effectively protect the rights of trade unionists, journalists, human rights defenders, critics of the government, faith and religious leaders and other civil society activists.”

In remarks on the House floor, Rep. Wild said U.S. tax dollars should not be used to supply weapons, training, and other forms of assistance to Philippine state security forces in light of their responsibility in far-reaching and violent human rights violations.

“After an estimated 30,000 extrajudicial killings in the Philippines between 2016 and today, after the assassinations, arbitrary arrests, torture, and red-tagging of labor organizers and oppositions leaders, after former President Duterte’s calls for assassinating politically engaged bishops, and after the Philippines has been named year after year by the International Trade Union Confederation as one of the world’s 10 most repressive countries for the labor movement and workers, the time is long overdue to begin putting some basic human rights guardrails in place in the United States-Philippines relationship,” Wild said.

The day before Sec. Blinken’s meeting with Pres. Marcos, Brandon Lee, a U.S. citizen, journalist and activist who was shot in the Philippines in a suspected extrajudicial assassination attempt three years earlier, released a recorded video message to President Biden about the visit.

“Hello, President Biden and Secretary of State Blinken. My name is Brandon Lee and I am a Chinese American and a U.S. citizen who was born and raised in San Francisco, California. For nine years, I lived in the Philippines with my wife and daughter. I was an environmentalist, human rights volunteer and community-based journalist, writing to protect the indigenous people against the development aggression on their land and livelihood.

“In response to my advocacy and activism, Philippine military harassed, intimidated, and threatened me. I was under constant surveillance for five years and on August 6th of 2019, they shot me in front of my family. I nearly died. I suffered eight cardiac arrests and now I'm a quadriplegic. I cannot use my hands or my legs. I'm paralyzed from the chest down.

“Since that fateful day, my family has been forced to flee our home for safety. And thanks to the U.S. government and many of my friends and supporters who financially contributed to my medical evacuation, I was able to fly back to San Francisco. We are back in the U.S., far from the Philippine military.

“But until now, three years after the attempted assassination of my life, there has been no investigation or accountability. And my colleagues back in the coalition in the Philippines continue to be in grave danger.

“I just learned that Secretary of State Antony Blinken will be meeting with the new Marcos regime. And, on August 6th, which marks three years since the day the Philippine military tried to assassinate me, I would like to request that Secretary Blinken raise the critical issue of human rights to the new Philippine administration.

“As you know, in the last six years under President Duterte, the Philippine military and police have killed over 30,000 people with impunity. In the first month under Marcos, there have been illegal arrest of activists and indiscriminate killings of activists. A 9-year-old was even killed in a military house-to-house search operation.

“The U.S. Philippine relationship should not only be based on economic and military interest but most importantly, on the respect for human rights, justice, and accountability to its people. Thank you in advance for considering this request. I hope to hear back from you.”

Photo: United States Secretary of State Antony Blinken meets with Philippine President Bongbong Marcos at Malacañang Palace in Manila on August 6, 2022. Photo by the Office of the President of the Philippines, available in the public domain.