Nonviolence and the Web of Creation 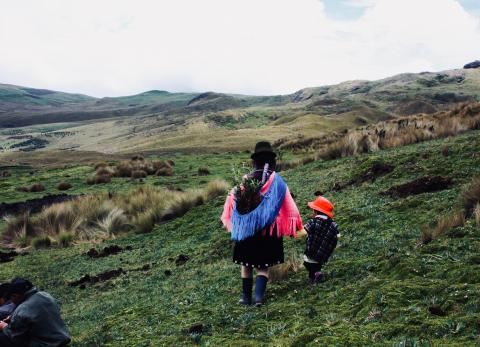 Dan Moriarty, Sustainable Pathways to Peace coordinator for the Maryknoll Office for Global Concerns, spent 17 years in Bolivia, first as a Maryknoll lay missioner and then as director of immersion programs at the Maryknoll Mission Center in Latin America. This article was published in the November-December 2021 issue of NewsNotes.

I was joined virtually by Tania Ávila Meneses from Bolivia. A Quechua Indigenous theologian, Tania serves as coordinator of the Bolivian Amerindia theologians network; on the Indigenous Peoples’ and Women’s teams of the Pan-Amazon Ecclesial Network (REPAM); and on the Integral Ecology Commission of the Latin American and Caribbean Confederation of Religious. We worked together for many years at the Maryknoll Mission Center in Latin America. In 2019, at the personal invitation of Pope Francis, Tania participated in the Synod on the Amazon at the Vatican.

Our 30-minute presentation explored the ways Andean cosmovision can help Catholics to better understand gospel nonviolence in the context of Catholic teaching on integral ecology, particularly as presented by Pope Francis in his encyclical, Laudato Si’, and in the synod’s concluding document, Querida Amazonía (Beloved Amazon).

More than a theology or a philosophy, cosmovision refers to a people’s integral way of understanding and relating to the universe, as well as to God and one another. According to Andean cosmovision, all the elements that sustain life within a given ecosystem – humans, plants, and animals, but also earth, water, and air – are considered living beings in relationship with one another. Relationships are grounded in the value of reciprocity – not transactional, but relational, marked by mutual aid and harmony. Reciprocity and harmony define right relationships between humans and with the rest of nature.

Harm done to the environment, then, is a form of violence: it harms a member of the community. Broken relationships with nature lead to suffering. “Living well,” according to the Andean concept of sumaq kawsay or buen vivir, means healing such ruptures and nurturing relationships in which all beings have what they need to thrive – a concept not unlike that of just peace, or shalom.

Church leaders draw similar connections. When describing his prophetic resistance to nuclear arms, Seattle Archbishop Raymond Hunthausen described the weapons as a threat not just to humans, but to all God’s creation. In his most recent encyclical, Fratelli Tutti, Pope Francis grounds all of Catholic social teaching in the assertion that we are “sisters and brothers all,” but cites as well St. Francis of Assisi’s use of the words “brother” and “sister” to describe his relationship to nature. And in Laudato Si’, Francis lists attacks on nature among forms of violence, and condemns theologies that emphasize humanity’s dominion over God’s creation, describing us instead as creatures within it, with a “relationship of mutual responsibility between human beings and nature.” He points to St. Francis’ experience of harmony with nature as healing the broken relationship between humanity and the rest of creation.

Tania goes one step further, asserting that we can learn how to heal and achieve harmony from the earth’s own way of shaping relationships. “The earth,” she says, “can teach us to be nonviolent.” She cites the example of a cactus flower “transforming reality with nonviolence” by boldly asserting itself in all its fragile beauty, thriving in the midst of a thicket of needles, while allowing the needles to thrive as well. She points to human cooperation with nature through successional agroforestry, in which crops of diverse sizes and life-cycles are grown together. They care for one another, providing each the shade or sun it needs. And while monocultures eventually sap soil of its capacity to sustain them, a diversity of crops maintains healthy soil, which in turn nurtures the life of the plants.

“We humans can re-learn what is in our nature,” Tania tells us, “because it is woven into us as humans, this option for a way of life that is nonviolent, that protects and cares for creation, that understands itself to be interdependent.”

The webinar was designed to reflect the theme for this year’s days of action, “Nonviolence as a way of life in the web of creation.” Additional events were held by Pax Christi members in Australia, Austria, Burundi, Canada, the Democratic Republic of Congo, England and Wales, Flanders (Belgium), Germany, Italy, Scotland, and at the United Nations in New York.

Faith in Action: Watch the webinar with Dan Moriarty and Tania Ávila at bit.ly/NVCreation