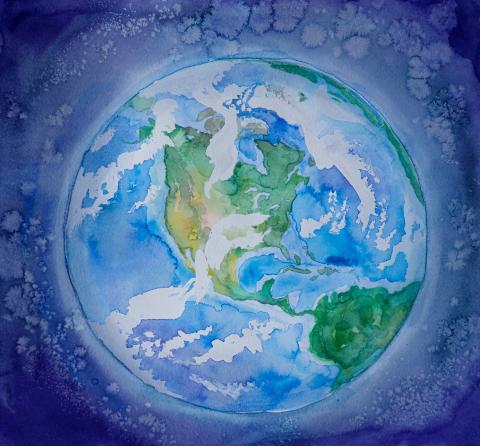 Maryknoll missioners took actions to respond to the cry of the Earth leading up to the UN Climate Talks (COP26) in Glasgow, Scotland, in November, 2021. This article was published in the November-December 2021 issue of NewsNotes.

The Maryknoll Fathers and Brothers and the Maryknoll Sisters completed major actions to address climate change in the weeks leading up to the UN Climate Talks. Coming at it from different angles, the missioners share the understanding that the world has yet to address the true scale of the climate emergency.

As previously reported by Fr. Frank Breen, MM, the Society adopted a major paper on climate change at its General Chapter in July. “From now on, Maryknoll [Fathers and Brothers] seeks to integrate the care of creation in all that we are and all that we do.” Fr. Breen reported that the Chapter concluded with a long list of recommendations, including “setting aside one percent of the Society’s annual budget designated for actions that combat climate change.”

And, in September, the Maryknoll Fathers and Brothers completed construction of 12 solar carports spanning two parking lots at their New York campus. According to an article in Solar Power World, the project provides the Society with “covered parking, downward-facing LED parking lot lighting to increase nighttime security and a visible green initiative — all while extending 10% electricity bill discounts to Maryknoll and local community members through community solar.”

As the Maryknoll Sisters representative to the UN, Sr. Marvie Misolas, MM, presented on a webinar about climate adaption as seen in the Philippines, where, she says, people are exhausted by extreme hurricanes that bring torrential rains, violent winds, and mudslides. Sr. Misolas was one of six panelists who spoke about spirituality as a source of resilience to climate change. Saying that the world needs to make a “big shift on climate action at COP26,” Sr. Misolas called us to “righting our relationship” with Earth and offered Thomas Berry’s ten principles of jurisprudence to understand “our place as humans in the evolutionary deep time.”

And on Oct. 26, the Maryknoll Sisters delivered a four-minute video intervention as part of the UN High-level Thematic Debate “Delivering Climate Action: for People, Planet & Prosperity.” The three-part testimony, delivered by Srs. Anastasia Lott, Marvie Misolas, and Rebecca Macugay, can be viewed starting at 3:48:40 of the recording. The following is the transcript:

The directives of the Maryknoll Sisters Congregation require that our investments in capital markets further the mission, align with our values and advance the UN Sustainable Development Goals. We advocate for a just transition to a low-carbon economy by encouraging companies to reduce emissions in line with a  1.5˚C warming scenario. We have been part of successful efforts calling on major banks to commit to achieving net-zero greenhouse gas (GHG) emissions from their financing activities.  Through participation in the Climate Solutions Fund — a collaborative initiative of 16 congregations of Dominican Sisters and a global Wall Street investment firm, our anchor investments have attractive additional investors, providing a pool of more than $130 million. We hope our efforts will spark a movement of integrated climate solutions that are responsive to Pope Francis’ moral call to humanity in Laudato Sí to care for God’s creation and God’s people.

What does it look like when women lead climate action?  Women are leaders in climate adaptation.  In 2016, in Antipolo, Philippines, women participation in reforestation and afforestation programs is part of a community-based watershed conservation program, the Marikina Watershed Protected Landscape, a reef-to-ridge initiative in adaptation-mitigation program.  This is a sub-national level initiative conserving fresh water sources directly beneficial to surrounding communities.  This program is a multi-stakeholder participation that people’s organizations composed of local women and environmental advocacy networks.  Local women-initiated leadership in the implementation process:  from seeds/wildlings collection, setting -up nurseries, participation in government meetings and capacity building workshops, sale of seedlings to the government, planting and monitoring.  Women leading climate action have shown interconnectivity of solutions.

In April 2012, we the Maryknoll Sisters entrusted 43 acres of the 60-plus acre property at our Center in Ossining, NY to the Westchester Land Trust that will ensure that the area is kept in its natural state. The Conservation Easement is to protect the environment which contains both native woodlands and wetlands. The trust is more than a legal agreement. It is a sacred trust.

We believe that creation is a primary source of revelation of the Divine Presence. It is a form of ecosystem- based adaptation that will help towards the attainment of 1.5 degree Celsius.