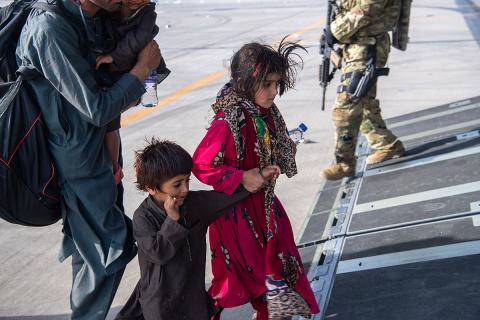 More than 75,000 Afghans in the United States risk becoming undocumented if Congress does not take action. The following article was published in the September-October 2022 issue of NewsNotes.

One year after the fall of Kabul, a bipartisan group of senators and representatives introduced legislation in both houses of Congress in August to allow Afghan evacuees to adjust their status to lawful permanent residency. The bill, known as the Afghan Adjustment Act, has been a focus for months of immigrant rights groups, veterans groups, and refugee resettlement agencies, including the U.S. Conference of Catholic Bishops.

If enacted into law, the bill would create a streamlined process for Afghans who entered the United States with humanitarian parole to apply for lawful permanent resident status.

Bishop Mario Dorsonville, chairman of the USCCB’s Committee on Migration, sent a letter of support for the legislation, stating, “[I]t is both our moral duty and in our country’s best interest to provide our new Afghan neighbors with a pathway to permanent legal status.”

Following the U.S. military withdrawal from Afghanistan in August 2021, tens of thousands of U.S.-affiliated and at-risk Afghans were evacuated to the United States via “humanitarian parole,” a temporary allowance to enter and remain in the United States for one or two years. Despite receiving this life-saving evacuation, Afghans under this status now live under a cloud of legal uncertainty, without a clear path to build a life in the United States.

To resolve this, Congress needs to pass the Afghan Adjustment Act, patterned after similar adjustment acts passed following previous U.S. wartime evacuations, including for Cubans after the rise of Castro, Southeast Asians after the Fall of Saigon, and Iraqi Kurds during the rule of Saddam Hussein.

Without an Afghan Adjustment Act, tens of thousands of Afghans who were evacuated to safety by the U.S. military will have to submit new asylum claims. They will find themselves in a broken immigration system that is expensive and arduous, made harder by a long backlog and the need for applicants to show more documentation, a requirement particularly difficult for Afghans who were forced to destroy their papers to avoid violence from the Taliban as they fled Kabul.