Joint Statement on the Violent Conflict in Ethiopia 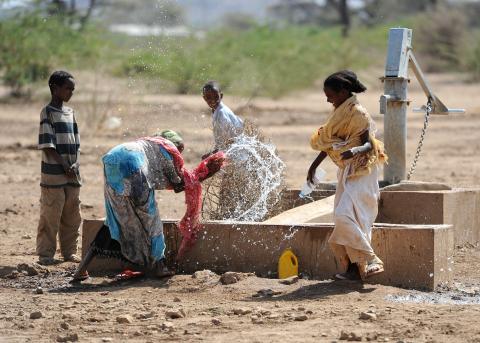 On Nov. 17, 2021, Advocacy Network for Africa (AdNA), Sojourners, and TASSC issued the following joint statement about the violent conflict in Ethiopia that includes recommendations for short- and long-term actions for building peace.

We, the undersigned regional and international civil society organizations concerned with the situation in Ethiopia, call on the belligerent parties in the conflict in Ethiopia, to cease hostilities, allow for unrestricted humanitarian access and ensure that human rights for all Ethiopians are respected and protected. It is our position that there can be no victory through force of arms and perpetuation of the war will burden the people of Ethiopia with bearing the terrible cost of this conflict for generations.

November 4, 2021, marked 12 months since war broke out between the Ethiopian Federal Government and its affiliated forces, including militias from the Amhara region and Eritrean troops on the one hand, and the Tigray People’s Liberation Front’s (TPLF) military forces on the other.

The conflict has already caused terrible suffering to citizens in the areas where the fighting is taking place and to citizens elsewhere in Ethiopia who are called upon to support the war with manpower and sacrificial garnering of wages and diversion of public resources to the battlefront leaving them destitute. Access to the Northern region remains extremely difficult. Human rights groups and the international media have reported massacres of civilians in numerous locations and have collected horrifying anecdotal accounts from victims. However, since access to the war zones is restricted, rights defenders and journalists raise fears that their alarming reports reveal only a fraction of the ongoing atrocities and suffering of the Ethiopian people.

The humanitarian situation continues to deteriorate. According to the United Nations, the conflict has pushed over 400,000 people into famine-like conditions, and as many as seven million people are in need of food assistance in the regions of Tigray, Amhara and Afar. Close to 50,000 people from the region fled to Sudan before access was cut off and there are at least two million persons who have been internally displaced (IDPs) as a consequence of this war.

Approximately 52% of northern Ethiopia’s IDPs are women and girls in a conflict characterized by appalling levels of vicious gender-based violence. Consistent reports of gang rape, civilians being forced at gunpoint to rape family members and brutalities intended to render women infertile. These violations have been further exacerbated by the deliberate destruction of healthcare facilities in Tigray.

International human rights groups and UN officials have concluded that Ethiopian and Eritrean soldiers as well as some members of the TPLF and militias aligned with them have systematically committed grave abuses and are using sexual violence “as a weapon of war, as a means to humiliate, terrorize and traumatize an entire population today and into the next generation” which constitutes war crimes.

It is also vital to note that starting in August, the conflict spread outside of the Tigray region when Tigrayan forces seized Lalibela, a town within the Amhara region. Later that month, reports show that the Tigray forces occupied Weldiya, an Amhara transport and commercial hub on the road to Addis Ababa. A report from the Crisis Group found that the Tigray offensive has uprooted at least 450,000 people in Afar and Amhara.

The resumption of full-scale hostilities in September 2021, which included a military offensive against the Tigray city of Mekelle using air bombing, reports of a march by TPLF to join with Oromo Liberation Army OLA and other southern forces to capture Addis Ababa and reports of warring parties forcibly conscripting Ethiopian youth to send to the war front with little training and inadequately supplied are alarming and demand an urgent, robust response from the international community. Renewed aggression will further spread fighting, instability, famine and risk, destabilizing the entire Horn of Africa region.

During October 2021, a TPLF advance through the Amhara Region claimed control of Dessie and Kombolcha. This situation has been further worsened with the call to civilians in Addis Ababa, including children, to take up arms and the declaration of a national state of emergency on November 2nd.

A joint investigation by the UN and Ethiopia published on November 3rd, 2021 recorded that all parties to the violence have used civilian infrastructure for military purposes and thus caused further internal displacement, taken part in cycles of violence against civilians, and have committed gender-based violence against both men and women.

We welcome the recent steps taken by the regional and international community to intervene on behalf of the citizens of the region to investigate, to call for protection and to
urge steps to ceasefire and dialogue. The African Union’s (AU) initial investigation into human rights violations, joined by efforts by the European Union and the U.S, sought an end of violence, as well as allocations of funds to provide necessities. However, the crisis continued to worsen at an alarming level and required intensified efforts. Most recently, on November 8, the UN Security Council received a report from the African Union's envoy for the region, former President Olusegun Obasanjo of Nigeria, who said that "The window of opportunity we have is very little and that time is short" for the conflict to end without disintegration within the region. The US and AU worked together in early November to end the fighting.

In light of these developments, and specifically in the short term, AdNA and the undersigned call for all parties and peoples in Ethiopia to respect human dignity and honor international and regional human rights standards and humanitarian law by taking the following steps:

1. Immediately end hostilities and support a negotiated ceasefire. This must include independent verification that all Eritrean troops have withdrawn from all parts of Ethiopia.

2. Take immediate steps to ensure that individuals are safe, and that the rights of all Ethiopians are respected and protected.

3. Secure immediate and unrestricted access for humanitarian organizations including the creation of humanitarian corridors to allow humanitarian assistance to facilitate the distribution of food and health services to people in Northern Ethiopia and to other disenfranchised communities who have been exposed to famine conditions as a result of this war.

4. Call for an inclusive national dialogue process to be launched immediately, supported by the international community, with all political parties and stakeholders participating, convened by a neutral party to deliberate on a peaceful transfer of power to a coalition government that does not include leadership by either belligerent party.
In the Long term, AdNA calls upon the international community to

5. Establish independent impartial investigations to investigate ongoing human rights abuses committed by all parties to the Tigrayan conflict and by government forces in other parts of Ethiopia, in Oromia, Benishangul-Gumuz, Amhara, Somali, Sidama and Southern Nations, Nationalities, and People’s Region (SNNPR) regional states. Attend to the plight of minorities in all regions.

7. Press the Government of Ethiopia -- whether in the hands of Prime Minister Abiy Ahmed or post war transitional council, to halt brutal crackdowns on opposition groups and open up civic space.

8. Press the Tigray Defence Forces (TDF) and allied forces to investigate and hold accountable persons linked to human rights abuses including those linked to acts of gender-based violence and rape, assassinations and extrajudicial executions.

9. Encourage the United States and other donor countries to Ethiopia to ramp up the provision of humanitarian medical aid, particularly for survivors of gender-based violence, by supporting health centers, establishing safe houses and providing counseling services.

10. Urge the UN to call on the International Criminal Court to open an investigation for the purpose of identifying for criminal prosecution those responsible for atrocities and human rights abuses, in particular, the use of targeted sexual violence in Ethiopia.