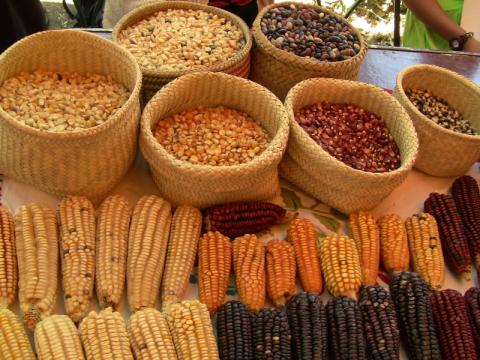 The following report, published in the November-December 2013 NewsNotes, was written by our colleague Njoki Njoroge Njehu, executive director of the Daughters of Mumbi Global Resource Center in Nairobi, Kenya. Njoki was an invited speaker at the Food Sovereignty Prize events in Des Moines, IA, in mid-October; the Food Sovereignty Prize was created as an alternative to the World Food Prize. (See Food sovereignty best addresses public interests, September-October 2013 NewsNotes.)

The 2013 World Food Prize was awarded to champions of biotechnology, in particular genetic modification. The winners were executives of Monsanto and Syngenta and the chairman and founder of Belgium’s Institute of Plant Biotechnology Outreach.

Even in a world that has become more laudatory of the corporate agenda, this was beyond the pale. Over 340,000 people signed a petition in protest of the choice; protests, teach-ins and press conferences were held during the week leading to the official awards ceremony (Oct. 16-19).

The UN states that women farmers feed 80 percent of the world’s population, so it is obvious that agribusiness is no answer to the world’s hunger and nutrition problems. (See Rural women propose solutions, demand action, September-October 2013 NewsNotes.) GMOs are not what the world needs to combat hunger and malnutrition. I believe that GMOs are the most prescient signal of a corrupt, moneyed corporate agricultural system that puts profits before people. Corporate agriculture [agribusiness], even in the global North, uses large tracts of land, expensive machinery, and a great deal of pesticides, fertilizers, and water -- and this is the model being considered for countries in Africa that have been targeted by the G8’s New Alliance for Food Security and Nutrition.

The G8’s initiative sounds warm and fuzzy, but it offers a model to African countries that will not solve the hunger problems the continent faces. African women farmers hold the answers to nutrition and food problems and continue to feed their families under very difficult circumstances. Corporate agriculture is part of the problem that keeps food out of the mouths of African children as well as Indian, Latin American, and Asian children.

The "solutions" that the G8’s initiatives and other schemes dreamed up by corporate agriculture include: land grabs which take away land from subsistence farmers; cultivation of biofuels rather than food; and genetically modified organisms that are fraught with danger for people and the environment. These along with food aid and farm subsidies decimate food security and violate human dignity by destroying the livelihoods of farmers and their communities. Ample research and evidence show the problem with hunger in the world is not lack of food but poor distribution of food, poor post-harvest storage, and of course, bad policy priorities that privilege agribusiness over farmers who feed the world.

The week that I spent in Des Moines with the Haitian winners of the Food Sovereignty Prize, with activists and organic farmers from Iowa and other parts of the Midwest, with men and women, old and young, who do not believe the hype, who are fighting for alternatives, gives me hope that even the most powerful GMO companies have not successfully sold their swill to farmers and to us. We have a charge and an obligation to keep fighting for alternatives, to keep fighting so that African farmers, Latin American farmers, organic farmers in the Midwest, and small-scale Asian farmers do not become a footnote in a future world where the loudly proclaimed drive to feed "nine billion by 2050" obliterates the need for healthy, organic and indigenous foods, while ignoring some of the underlying policy changes that keep food out of people’s reach.

From urban farmers to small-scale farmers around the world, to organic farming activists, the world says no to GMOs. We must keep fighting for food sovereignty, fight for the livelihoods of farmers, and build solidarity across borders and around the world, as the MST (Landless Rural Workers’ Movement) of Brazil is doing with peasant farmers of Haiti. The lines are drawn; it is about us and corporate agriculture. Simply put, we cannot afford to lose on this. We must not lose on food sovereignty, we must not lose on biodiversity, we must not lose on the livelihoods on millions and millions of people, hunger must not win. To paraphrase the late U.S. Rep. Barbara Jordan, the stakes are too high for our food’s future to be a spectator sport.

The Daughters of Mumbi (DoM) Global Resource Center is an independent, non-partisan, non-ethnic Kenyan network inspired and informed by the struggles of African women. The network of autonomous groups (85 percent women) focuses on gender rights and food sovereignty; civic education and advocacy; and mentorship for members’ children (aged 6–19 years).