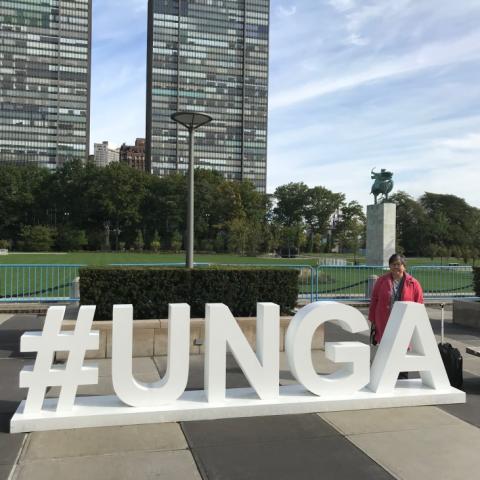 Maryknoll Sister Marvie L. Misolas reports on the critical issues discussed by world leaders during the annual general debate of the United Nations General Assembly in New York in September. This article was published in the November-December 2018 issue of NewsNotes.

The 73rd session of the UN General Assembly (UNGA 73) opened on September 18. Ecuadorian diplomat Maria Fernanda Espinosa Garcés, the first woman president of the UNGA from Latin America, announced in July that the theme of the general debate will be, ‘Making the United Nations Relevant to All People: Global Leadership and Shared Responsibilities for Peaceful, Equitable and Sustainable Societies.’

The first day of the high-level general debate was September 25. Over the course of seven days, world leaders engaged in discussions that included the following critical global topics.

Iraq’s foreign minister, Ibrahim al-Jaafari, highlighted the war-torn country’s plan for national economic, social, and cultural progress with a focus on young people and women, as well as its efforts to aid returning refugees. He also called on nations to meet their financial commitments to strengthen Iraqi state institutions.

Foreign Minister Walid al-Moallem of Syria denounced the U.S. for “supporting terrorism and war crimes” and demanded "occupation" forces from the U.S., France, and Turkey leave the country immediately. He characterized the seven-year war as almost over and said Syria is inviting back millions of refugees who fled their homeland due to terrorism and economic stress.

Ministers from African countries in the Lake Chad Basin region, including Nigeria, Cameroon, Chad, and Niger, committed to working collectively to stop the spread of the extremist group Boko Haram and illicit trafficking of all sorts, including human trafficking. The region contains numerous hotspots of conflict and crisis, including illegal immigration, organized crime, drought, and desertification, which make it home to one of the most severe humanitarian emergencies in the world. To address these concerns, Chad pressed for a permanent seat on the Security Council to represent Africa.

North Korean Foreign Minister Ri Yong-ho reiterated his country’s commitment to denuclearization of the Korean peninsula, while calling into question the United States’ commitment due to continuing sanctions. Ri said North Korean leader Kim Jong-Un’s resolve is to turn the Korean peninsula into a land free of both nuclear weapons and threat. The two Koreas will become the “cradle of peace and prosperity that contributes to security in Asia and the rest of the world,” Ri said.

Sudanese Foreign Minister Dardari Mohamed Ahmed said Sudan currently hosts three million refugees and shoulders two-thirds of the costs. He praised the Karthoum Process, a platform for political cooperation among the countries along the migration route between the Horn of Africa and Europe, for slowing down the flow of migrants from Africa to Europe, which has aided efforts to combat human trafficking in the region.

The Holy See, represented by Archbishop Paul Richard Gallagher, noted the importance of the Global Compact on Migration, to be adopted in December in Morocco, and said that together with the Global Compact on Refugees, they will be “useful tools for good migration management at every level and a common resource for achieving our shared responsibility in front of the plight of refugees.”

On September 26, the UN commemorated the Day for the Elimination of Nuclear Weapons with strong warnings by some member states of a renewed nuclear arms race coupled with modernization. All member states agree that nuclear weapons are the greatest existential threat to the world and the vast majority agree that the principle of deterrence is incompatible with the UN’s principle of peace and security. The Holy See expressed the importance of the deep bond between the promotion of a culture of peace and disarmament efforts and said that maintaining nuclear weapons costs billions in funds that could be invested in sustainable development. Groups of countries are reportedly working to establish ‘nuclear free zones’ in Asia, Latin America, Middle East, Africa and the South Pacific. At the same time, the call from civil society for a full and irreversible nuclear disarmament and total non-proliferation is loud and clear. It includes support for the ratification of the Treaty on the Prohibition of Nuclear Weapons.

In his opening address, UN Secretary-General Antonio Guterres warned heads of states about the speed of climate change impacting both nations and individual lives across the globe. Members of the group Small Island Developing States decried their vulnerability to rising sea levels, typhoons, drought, and encroaching salty waters. These countries are calling for urgent implementation of the Paris climate agreement.