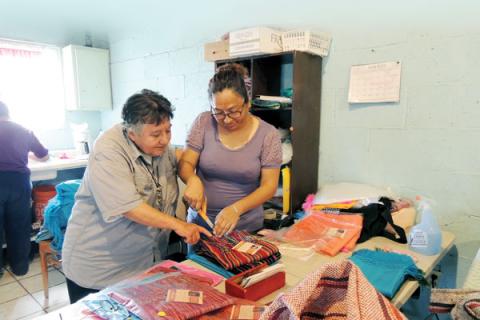 Congress is expected to vote on the renegotiated trade agreement between the U.S., Mexico and Canada in early 2019. This article was published in the November-December 2018 issue of NewsNotes.

From Cambodia to El Salvador, Bangladesh to Tanzania, Maryknoll missioners accompany people and communities affected by poverty. Based on our belief in the value of each human person and their right to a life of dignity, we work to eliminate the root causes of poverty found in unjust economic structures.

Maryknoll Sister Marvelous Misolas (pictured below) was at the United Nations to commemorate the International Day for the Eradication of Poverty in October when Secretary-General António Guterres said, “Poverty is not inevitable. It is not a natural state of being or occurrence. It is most often the outcome of choices that societies have made. Today we must build a fair globalization that creates opportunities for all. Inclusive growth supported by economic and social policies that empower people and provide equal opportunities make the difference.” “I agree with Secretary-General Guterres,” said Sister Misolas, a native of the Philippines who served in Taiwan and is now the nongovernmental representative of Maryknoll at the UN. “Ending poverty is not a matter of charity; it is a question of justice.”

After more than two decades, NAFTA, the North American Free Trade Agreement between Mexico, Canada and the United States, has failed to eliminate the root causes of poverty and create opportunities for all. It has at times undermined worker rights and fueled nationalism. Renegotiated and renamed the United States-Mexico-Canada Agreement (USMCA), the new deal needs to be approved by the U.S. Congress and ratified by all three countries before going into effect. A draft of the USMCA is available on the website of the Office of the United States Trade Representative (https://ustr.gov/).

These are questions people of faith and conscience can ask their members of Congress as they study and vote on the deal in 2019:

Does the “new NAFTA” work for economic justice with an emphasis on the elimination of poverty and the empowerment of impoverished people?

What will its impact be on labor standards and protections for workers; on the access to agricultural resources such as seeds, and affordable medicines; on food safety and health care concerns; and on corporate accountability and ecological sustainability?

Photo: Maryknoll Sister Margaret Sierra and a member of the sewing cooperative at Santa Catalina center in Ciudad Juarez, Mexico. An article in a recent issue of Maryknoll Magazine profiles Maryknoll Sister Margaret Sierra and her ministry in Centro Santa Catalina to provide income and building community for women in Juarez, Mexico. The center was founded in 1996 by Adrian Dominican Sisters Donna Kustusch, OP, and Eleanor Stech, OP, to help the residents of Juarez, Mexico, to become self-sustaining. The Adrian Congregation is still involved in the ministry today: Adrian Dominican Sister Maureen Gallagher, OP, is Director of Marketing for the women’s sewing co-op, Las Mujeres de Esperanza y Fe (Women of Hope and Faith), which manufactures and sells products such as shawls, purses, potholders, and dolls to help the women support their families. Read the article by Giovana Soria, which details the ministry of empowerment that continues to this day at Centro Santa Catalina.