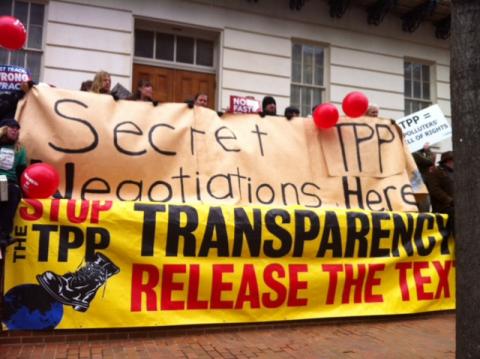 The following article was published in the September-October 2015 NewsNotes.

On July 31, another Trans-Pacific Partnership (TPP) trade agreement deadline passed. Supporters and detractors both thought the pact would have been solidified during negotiations held in Maui the last week of July, but many issues linger, including access to medicines, privacy concerns regarding technology, and intellectual property patents.

The environment chapter was recently finalized; it addresses wildlife trafficking, illegal logging and illegal fishing but does not require signatory nations to endorse relatively weak standards. Additionally, the chapter says nothing about climate change or incentives for TPP countries to move towards more sustainable, low-emission energy sources or business practices;  it’s expected that the investment chapter will continue to allow foreign corporations to sue governments when enforcement of domestic environmental laws negatively affect the corporations’ profits.

Big questions remain on the final outcomes for intellectual property (IP) standards, including access to medicines. Some countries, such as Vietnam, currently have little to no barriers on medicine access, especially on “biologics.” The proposals leaked from the last few rounds include data exclusivity terms of up to 12 years, which would mean a generic alternative would not be ready for roughly 20 years.

On August 5, Knowledge Ecology International leaked a draft of the access to medicines chapter that they believe reflects the discussion in Maui. Much of the analysis below is provided by Australian public health professor Deborah Gleeson.

Fortunately, both the leak and the outcomes in Maui suggest that the United States is backing down from 12 years to eight of data exclusivity on biologics, which is closer to what the Obama administration is pushing for domestically. This is the first time that a provision specifically on biologics – used in some of the new drugs for cancer, rheumatoid arthritis, and other auto-immune disease – is included in a trade agreement.

Some TPP countries currently have no laws on biologics patents. Chile, Australia and New Zealand are pushing to allow countries to define biologics domestically, potentially easing the burden of some of these patents. The chapter will still promote “evergreening” of patents which would allow drug companies to make small changes to a drug that would renew a patent for another 20 years, thereby barring a generic version. Other troublesome pieces include low standards for obtaining patents and little opportunity for countries to tighten patents in the future. There will also be mandatory patents on medicines from plants or plant varietals which could impact food security in some countries.

Another controversial issue is the five years of protection for small-molecule drugs, pushed hard by the U.S., and additional three years of data protection for new clinical information or evidence of prior approval in another territory, promoted only by the U.S. and Japan. Some flexibility in implementation is possible.

Overall, the chapter will protect and expand the pharmaceutical industry and make it much harder for generic drugs manufacturers, domestic drug industries in other countries, and countries such as New Zealand and Australia that offer affordable medications through their state insurance plans to provide access to affordable, life-saving medications. The IP chapter will make access to medicines particularly challenging for lower-income countries such as Vietnam and Peru.

Besides medicine access, other issues still being negotiated include access to dairy, sugar, and auto markets and whether currency manipulation will be included or dealt with separately.

Meanwhile, it is unclear whether negotiations will wrap up in 2015 or after the U.S. elections in 2016. Canadian Prime Minister Stephen Harper is in a close race, so Canada is unlikely to make any deals until after its October 19 election. With new Fast Track rules in place, the Obama administration must publicize the text 30 days before introducing an implementation bill; it must notify Congress 90 days before Obama intends to sign the agreement. Now that the July 31 deadline has passed, TPP cannot be voted on and signed into law before the end of 2015; the administration’s best hope is for Congress to vote on the agreement during the first three months of 2016 before the U.S. elections really ramp up. But as of yet, no additional ministerial-level meetings have been scheduled.