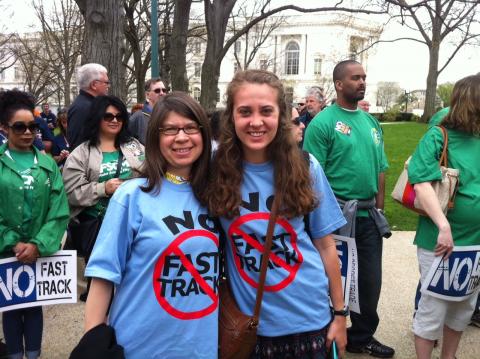 On April 16, Trade Promotion Authority (TPA) legislation was introduced by Rep. Paul Ryan (R-WI), Sen. Orrin Hatch (R-UT) and Sen. Ron Wyden (D-OR). This legislation, if passed, would create a “Fast Track” process for any trade agreements, including the proposed TransPacific Partnership (TPP), allowing them to bypass traditional committee processes and limit the decision to an up or down vote.

The legislation, touted as bipartisan, is opposed not only by most Democrats and some Republicans, but also by civil society groups representing consumers, faith communities, immigrant rights organizations, labor, public health advocates, and environmentalists.

Congressional Democrats oppose Fast Track due to concerns about labor, the environment and access to medicines. Republicans who oppose the agreement have seen their districts lose jobs due to past trade deals or are concerned about increased migration or ceding their authority over trade content to the administration.

Fast Track legislation is expedited, with limited time for debate, no ability to offer amendments, and an abbreviated review period. This version of Fast Track includes some improved negotiating objectives and a few attempts to fix procedural issues, but ultimately many of the basic problems which made it an undemocratic model in the past remain. For instance, the president can sign the agreement before sending it to Congress, so there is no way for Congress to certify that it includes any of the content that Congress wanted. This is particularly problematic when most legislators have been excluded from negotiations.

This new version also codifies that only staffers with security clearance can view the text before the negotiating parties agree on it; this was not an explicit legal requirement in the past.

On April 23, ranking minority leader Rep. Sander Levin (D-MI) introduced “The Right Track for TPP Act,” an alternative TPA bill. He argues that the TPP has been under negotiations for six years already and yet outstanding issues with the agreement are not addressed in the TPA legislation.

Rep. Levin’s bill, which was blocked by Rep. Ryan, would have allowed for more transparency and a greater role for Congress in directing the process and certifying that the negotiating objectives were included. It also included specific negotiating instructions for expedited consideration only and until a bipartisan group of House and Senate trade advisors had determined that the instructions were followed. Congress would have written the consultation procedures, including what negotiating texts must be shared with Congress and stakeholders. It included two useable mechanisms to enable Congress to remove expedited consideration where necessary.

Ryan, Hatch and Wyden are trying to move the Fast Track legislation as quickly as possible in order to seal the TPP deal before the end of the year so that it doesn’t interfere with the 2016 election cycle. The bill would move first in the Senate and then in the House. Senate Minority Leader Harry Reid (D-NV), however, tried to delay the process; he wants Trade Adjustment Assistance, the Africa Growth and Opportunities Act reauthorization, Generalized Systems of Preferences reauthorization, and other trade-related bills to be approved at the same time as TPA. At this point, the Senate will likely vote on the TPA bill the week of May 11.

Call your senators to oppose Fast Track; use this specially provided number: 888-410-0619. Suggested language: “Past trade agreements have destroyed rural economies in Mexico and Central America, have not improved dangerous labor conditions in Latin America, and have reduced access to life-saving medicines. The negotiating objectives in Fast Track and the little we know of the secretive TransPacific Partnership is that the TPP will cause further harm to the living conditions of impoverished communities among TPP trading partners. Trade must put human dignity and the health of God’s creation at the center. Please oppose Fast Track trade promotion authority.”