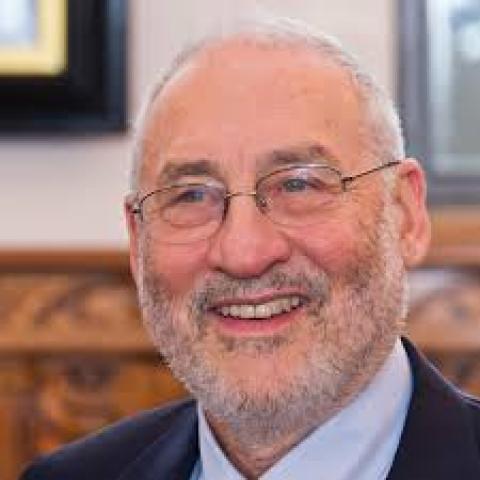 On January 20, Martin Luther King, Jr. Day, Joseph Stiglitz (shown at right), professor at Columbia University and recipient of the 2001 Nobel Prize in Economics, gave the keynote address at a roundtable, themed The threat of growing inequalities: Building more just and equitable societies to support growth and sustainable development, hosted by the Italian mission to the United Nations, the Italian Institute of Culture, the International Development Law Organization and the UN Department of Public Information. Sr. Claris Zwareva attended and wrote this report which was published in the March-April 2014 NewsNotes.

In addressing the issue of inequalities, Stiglitz quoted Rev. Dr. Martin Luther King, Jr. who said, "True revolutionary values will soon cause us to question the fairness and justice of our present policies. On the one hand we are called to play the Good Samaritan on life’s roadside but that will be an initial act. One day we must come to see that the whole Jericho road must be changed so that men and women will not be constantly beaten and robbed as they make their journey on life’s highway …" and, "[We] must honestly face the fact that the movement must address itself to the question of restructuring the whole of American society. There are 40 million poor people here and one day we must ask the question ‘Why are there 40 million poor people in America?’"

This problem highlights the economic system and broader distribution of wealth that in recent years have caused much suffering and weakened societies. Stiglitz pointed out that during the recent economic recovery, 95 percent of all gains have gone to the wealthiest one percent of the population. This unequal distribution of wealth has "hollowed" out of the middle section of the population whose salaries have remained stagnant for four decades. Other forms of inequality also exist: the inequality of opportunity, inequality of wealth, inequality of access to education, inequality to clean environments, as well as inequality due to gender, often ingrained through cultural practices and discrimination.

The growth in inequalities is not only determined by the laws of economics but is also determined by politics and the policies that govern them. This dynamic weakens social cohesion and results in conflict among those involved who perceive and resent injustice in the distribution of wealth.

Stiglitz noted that prosperity can be obtained either by generating new wealth that increases the gains or by moving existing wealth from the bottom up towards the upper one percent, creating inequality in consumption patterns. "Righteous indignation" comes into effect when workers’ demands such as just remunerations, access to national patrimony that is held by a few and equality of opportunity are not granted. In such situations of injustice, workers get angry and take to the streets demanding change.

This element of radical change is central to the success of the post-2015 development agenda. In order to correct the imbalance that is resulting in social unrest, the funneling of wealth to the top one percent ought to be corrected in order to bridge the gap that has continued to deepen. The world does not lack resources for all to live in equality and in dignity but the distribution of available resources has not been equal. Distributive justice guided by ethical principles that promote equality need to accompany the discussions that will lead to a robust and successful post-2015 development agenda.

Navi Pilay, the UN High Commissioner for Human Rights, suggests that the post-2015 development agenda stand on the firm foundation of human rights, along with the principles of equality, nondiscrimination and a broader sense of equity. At a roundtable discussion held on February 4 she put forward three ways that this can be done: first, by integrating a cross-cutting focus on equality and non-discrimination throughout all goals, targets, and indicators; second, by setting a stand-alone goal of equality and non-discrimination; and third, that, at the international level, the goal should be global partnerships that address inequalities between countries and the establishment of a global governance that calls all countries to accountability.

Nations must work together to end the vicious cycle of inequalities-deprivation-poverty by establishing policies that address inequalities in order to strengthen peace and security. All should work towards reducing the growing inequalities that continue to separate us and to end the culture of "haves" and "have-nots." As Jesus prayed that "all may be one" (John 17:21) so must we work that no one goes to bed hungry nor freezes to death for lack of housing.

In his recent apostolic exhortation, Pope Francis said "no" to the economy of exclusion, an economy that kills, and "no" to inequality. "How can it be that it is not a news item when an elderly homeless person dies of exposure, but it is news when the stock market loses two points? This is a case of exclusion. Can we continue to stand by when food is thrown away while people are starving? This is a case of inequality. The excluded are not the ‘exploited’ but the outcast, the ‘leftovers.’"