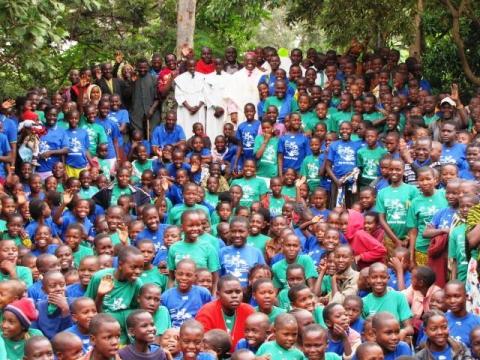 December means different rituals for different folks all around the world. It is holiday time for those celebrating Christmas, Kwanzaa and Hanukkah. Lay missioner Liz Mach writes about her work in Tanzania, where the holiday time also means the closing of schools and the return home of girls in order to undergo female genital mutilation (FGM). The following article was published in the January-February 2015 NewsNotes.

The roads of northern Tanzania are filled with dancing and celebrations in December as young men and women are escorted to the "cutter" to undergo circumcisions/mutilations that will mark their passage into adulthood. Fifteen percent of Tanzania practices this harmful tradition which impairs the reproductive, sexual and psychosocial lives of girls. Worldwide, three million girls are at risk yearly to undergo this practice.

FGM falls under the umbrella of gender-based violence (GBV), a human rights abuse against girls which impedes a society’s efforts to end poverty and promote gender equality. FGM is the partial or total removal of the external female genitalia or other injury of the female genital organs for non-medical reasons. It can be done for social, religious, cultural and aesthetic reasons and has a direct effect on the reproductive health of a woman for her lifetime.

The initial mutilation could lead to numerous health consequences including bleeding, shock, urinary retention, infection and damaged organs. Research done by the World Health Organization (WHO) and published in the Lancet in 2006 show that women who have undergone FGM are significantly more likely to experience difficulty during labor and delivery, including increased need for Caesarean sections, postpartum hemorrhage, episiotomy, need for resuscitation of the infant and perinatal death than women who have not had FGM. At the same time, most of the women who have undergone FGM live in areas without adequate infrastructure for safe deliveries, and those deliveries are much more serious with long term health consequences.

In our area, Tanzania’s Mara region, FGM is seen as a cultural rite of passage which the girl child moves through to become an adult and therefore eligible for marriage. According to Tanzania’s Law of Marriage Act, revised in 2002, a girl is considered to be legally of age for marriage at 15 years. Many forms of domestic violence, including FGM, are not defined in this act. The Sexual Offence and Special Provisions Act of 2008 protects girls who are under 18 from FGM, though this law is not often enforced due to fear, lack of legal education and cultural priorities.

Early marriages and early pregnancies often are direct correlations to lack of education and lifelong poverty. This cycle is difficult to break when it is woven into the societal life of a female. Failure to undergo the ritual cutting hampers both the family and the girl as it is possible that she will not be able to be married within the cultural boundaries. At the same time, the cutting opens her to physical damage and violence which will affect her throughout her lifetime. The bottom line is the violation of the human rights of the girl as defined by the World Health Assembly which passed a resolution (WHA61:16) on the elimination of FGM, emphasizing the need for concerted action in all sections – health, education, finance, justice and women's affairs.

Currently here in the Diocese of Musoma we have two "rescue areas." One is a camp up in the area where much of the cutting is being done; more than 600 girls are there under armed protection for the month of December. The other area is a year-round shelter built for the safety of any girl escaping from FGM and all forms of gender-based violence, as the first basic need when a girl escapes from probable FGM is to find protected shelter. Through a USAID program, a team within the local police have been specially trained to respond to issues of GBV; often those team members are the ones to bring girls to our site, where we provide a networking plan and provisions for safety to protect the girl from further abuse.

We have begun training the catechists in the diocese to recognize GBV and the role it plays within cultural activities. This multitasked approach might be our way to make a cultural change which will bring greater gender equity in an area where the 21st century clashes with traditional norms from long ago.

Photo by Liz Mach: Minister of Labour and Employment Hon. Gaudentia Kabaka, Bishop Michael Msonganzila, UN Representative to Tanzania Alavo Rodriguez and UNFPA Representative Dr. Natalia Kanem all traveled to for the graduation ceremony for the girls and closing of the 2014 camp. There were 630 girls in the camp and 207 boys in another camp of their own to provide education on gender and safe circumcision for boys.