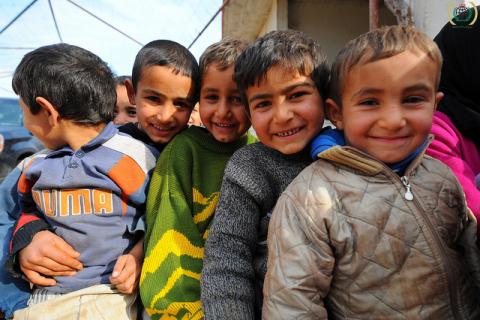 During a late May visit to the Shatila refugee camp in Beirut, Lebanon, a small Pax Christi International delegation delivered solidarity messages sent to the people of Syria from around the world. The messages represented many hundreds of people who participated in Pax Christi’s Bread Is Life: Solidarity Fast for Syria.

The small community center where the Syrian women gathered was opened only a few days before we visited. Staffed mainly by young Syrians forced by threats and unmitigated violence to leave their country, but who still have hope in Syria’s future, the community center fills gaps left by humanitarian aid agencies. Called Basmeh & Zeitooneh (Smile & Olive), the center helps newly arriving families find a place to live and provides them with basic necessities, psychological support for children, and connections to essential medical care.

Because the Lebanese government has refused to allow the United Nations to establish and run collective hosting facilities or refugees camps on its soil, thousands of Syrian families have been forced to rent whatever place they can find to shelter their families: apartments, rooms, and, in many cases, garages or makeshift rooms with cardboard walls. We visited many who were living in impossibly crowded conditions.

Syrians are enduring horrific suffering, both inside Syria and in most locations outside the country. According to the United Nations, Lebanon, Jordan, Turkey and Iraq are now hosting over 1.5 million Syrian refugees; 8,000 more are leaving Iraq on a daily basis; and an additional 4.25 million Syrians are displaced internally. The real numbers are probably much higher.

According to the UN Office for the Coordination of Humanitarian Affairs (OCHA), some Syrian cities have been almost entirely reduced to rubble, and widespread power disruptions have left countless communities without access to water. Almost a third of all houses across the country have been damaged or destroyed.

OCHA Operations Director John Ging, after a prolonged visit to Syria, repeated a call for the international community to find an urgent political solution to the crisis. It is extremely difficult, for example, for aid agencies to reach Aleppo. Although it is only a short drive from Syria’s border with Turkey, aid organizations are forced to travel to Aleppo from Damascus on a road dotted with over 50 government and opposition checkpoints.

According to the OCHA chief Valerie Amos, humanitarian convoys are regularly attacked or shot at, and staff are intimidated or kidnapped. For example, in late March a convoy carrying medical assistance for 80,000 people was hijacked by an armed group on its way from Tartous to Aleppo, and all of the supplies were stolen. And yet, in spite of the threats, humanitarian workers continue their critical work. "I want to pay particular tribute to the work of the Syrian Arab Red Crescent (SARC) volunteers," she said at an April briefing. "They have shown incredible dedication, impartiality and courage since the beginning of the conflict. Many of them do not hesitate to risk their lives every day to bring assistance to people in need, whether they live in government or opposition-controlled areas…. Given its network across the country and its capacity to negotiate access to almost all areas affected, SARC is an invaluable partner for the UN and other humanitarian organizations in Syria."

Syria’s government, responsible for protecting the people, is not only failing to do so, but is accused of viciously attacking civilian communities, including with its substantial air force. Between the Assad government, the Free Syrian Army and the many extremist elements increasingly involved in the conflict, few people we met in Lebanon thought that a negotiated solution in the near future was possible. Instead they were predicting a long, bloody war. We heard strong voices speak against any kind of a military intervention, but for consistent, diplomatic, relief and solidarity support from other countries without self-interested geopolitical maneuvering.

At the April briefing, Valerie Amos also said: "As a matter of priority, the Security Council must find ways to reduce the level of violence and stop the bloodshed. Parties must be reminded of their obligation to protect civilians and abide by international humanitarian law. The consequences of violating those rules must be made clear to all. Protection of medical facilities, staff and patients in particular must be ensured at all times. Parties must demilitarize hospitals and ... they must take all precautionary measures to avoid hitting medical facilities or staff." She urged the Security Council to "request the parties to ensure the safe and unimpeded access of aid organizations to those in need in all areas of Syria."

Urge Secretary of State John Kerry to actively encourage UN Security Council action in support of safe, cross-border corridors into Syria for humanitarian relief and to ensure that all promised U.S. aid for displaced and refugee communities is promptly delivered.