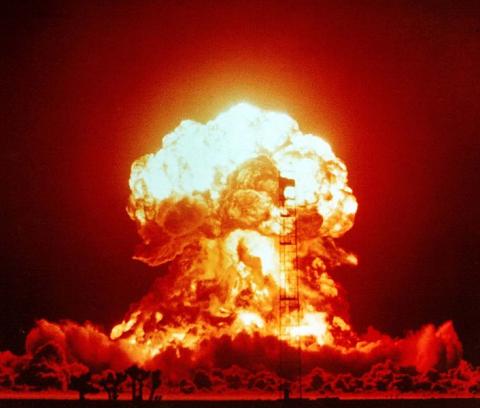 The following piece was published in the November-December 2014 NewsNotes.

From August 27-29, the UN’s Department of Public Information held its 65th annual conference. It focused on poverty eradication, sustainability, climate justice, human rights and partnerships among other relevant topics. Along with several other NGOs, Maryknoll cosponsored a side event entitled, “Sustainability and nuclear weapons?” held on August 28. Panelists, including Marie Dennis, Pax Christi International co-president and former director of the Maryknoll Office for Global Concerns (MOGC), addressed the incompatibility of sustainability with nuclear weapons which constantly threaten the existence of the entire ecosystem. Sr. Elizabeth (Claris) Zwareva, MOGC staff member, also served as a panelist; an edited version of her talk is reprinted below.

… Sustainability depends upon the equilibrium of entire ecosystems …. Today this equilibrium is under threat from the existence of nuclear weapons which continue to escalate tensions among nations. The solution is to build peace among nations while eliminating all nuclear weapons from the face of the earth. The [UN Conference on Sustainable Development] Rio+20 outcome document “reaffirmed the importance of freedom, peace and security, respect for all human rights including the right to development and the right to an adequate standard of living, including the right to food and water, the rule of law, good governance…”

Nuclear weapons did not just appear from nowhere; they are of human creation, products of scientific research and technological innovation that have created a monster that threatens the survival of life on Earth and cause irreversible damage to the environment. …

The nuclear bomb that destroyed Hiroshima and Nagasaki originated from the uranium that was mined from indigenous people’s lands. After uranium extraction the radioactive material left at the surface seeped into aquifers and also contaminated agricultural lands. “Blighted homeland,” a multimedia series by the Los Angeles Times, documents how uranium mining has affected the health of the Navajos. According to this documentary, from 1944 to 1986, 3.9 million tons of uranium ore were extracted from Navajo homeland. Navajos inhaled radioactive dust, drank contaminated water and built homes using sand and rock from the mines and mills.

Recently [Maryknoll Sister Rose Marie Cecchini] spoke to us of the continuing adverse and environmental impacts on communities at Crowpoint, New Mexico, and Tuba City, Arizona. Decades of uranium mining and abandoned mine sites that were never cleaned up by responsible federal agencies and mining companies continues to affect the health of these communities. Navajo miners working in open pit and underground mines were never warned of health risks from radioactive exposure to the uranium ore. Protective clothing, masks and essential ventilation were never provided by mining company officials, who were well aware of the radiation exposure to workers. [The] miners, with uranium dust-covered clothing, daily returned to their homes and families on the reservation. With no running water in homes, the women washed all the family clothing together using precious water hauled from wells 30 or 40 miles away. In this way, other members of the family were also exposed to radiation from uranium dust. Privately funded health studies continue to identify and document diverse types of cancers, respiratory and kidney diseases, as well as diabetes related to past radioactive exposure to uranium in the mines and currently abandoned mine sites.

The bomb that exploded over Hiroshima consisted of enriched uranium 235 and the one that exploded over Nagasaki consisted of plutonium 239, a by-product of uranium. These bombs had immediate as well as long term effects on the environment as well as on human health. The atomic bombs’ sudden, intense and dramatic effects have left indelible memories of death, destruction and horror among the Japanese peoples of the world. People in the affected areas still suffer from the effects of fallout. …

The results of scientific research that goes unaccompanied by ethical reflection can be disastrous. The God-given ability to reflect upon our actions and how they affect others is the way to curb those actions that cause harm …. By so doing we are accepting life, respecting it and acting in ways that will promote and not destroy it … The destructive force of nuclear weapons is incompatible with the principle of bringing about good, avoiding harm and acting justly.

As Jesus said, “I have come so that they may have life and have it in abundance.” Our duty then is to save ourselves and future generations from perishing from the monster of our own creation through embracing humility and loving life.