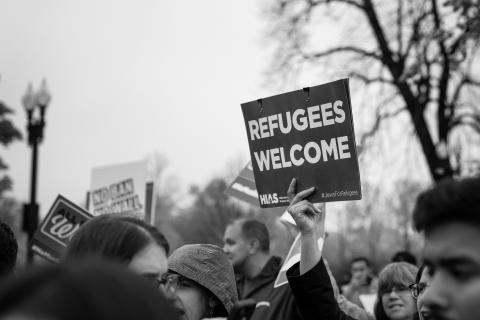 National refugee resettlement agencies are closing offices and laying off staff in response to the steep decline in arrivals under the Trump adminstration, leaving the future of the program uncertain. This article was published in the November-December 2018 issue of NewsNotes.

The Trump administration lowered the annual cap on the number of refugees it will admit and resettle in 2019 to 30,000, after failing to meet even half of this year’s historically low goal of 45,000. By setting the lowest bar since the resettlement program began in 1980, many fear the United States will abandon the most desperate people during the worst global refugee crisis since the Second World War; forfeit a powerful diplomatic tool and step away from our traditional commitment to human rights; and lose out on the contributions that refugees make to our communities and economy.

Another hidden cost of the Trump administration’s radical turn is the profound structural damage it’s already doing to the refugee resettlement system itself, which could severely limit the nation’s capacity in ways that would take years for subsequent administrations to reverse and rebuild.

“There has been, over the last two years, a systematic dismantling of the refugee-resettlement infrastructure by the administration, either directly or indirectly,” said Emily Gray, a senior official at World Relief, one of the nine nongovernmental agencies that the U.S. government contracts to assist and resettle refugees. The U.S. Conference of Catholic Bishops is the largest of the nine, which are all struggling to sustain operations as the numbers of refugees plummet. The State Department is expected to cut one or more of the agencies next year. “We see an administration that’s running a program that it’s intent on destroying,” said Mark Hetfield, president of the Jewish refugee organization HIAS, also one of the nine.

Starting with the Muslim Ban

The system started to tank with Trump’s two bans on Muslims and other refugees in 2017. With “extreme vetting” by an array of agencies, new layers of red tape and a gauntlet of other obstacles were added to an already onerous system, leaving many refugees to languish in line while they missed deadlines, or medical or security clearances expired, jamming a complex interagency process that already took an average of two years to complete. Compounding the slowdown, resources and personnel have been diverted to other programs, such as the screeners sent to fast-track the denial and deportation of asylum seekers from Central America. Taken together with shrinking admissions, critics say these roadblocks are wrecking the U.S. Refugee Admissions Program (USRAP) while they decimate the nonprofit and community partners that help integrate refugees into society. The program is being “managed to fail,” said Bob Carey, former director of the Office of Refugee Resettlement under Obama.

While they tangled the system, President Trump and other White House staff have vilified refugees by exaggerating their threat to national security (No refugee resettled in the U.S. has ever committed a lethal act of terrorism since the program began in 1980) and dismissing their value to the country and economy. Last year, for example, the White House suppressed a government report showing that refugees posed almost no threat to national security and quashed another report that found that refugees’ economic benefit exceeded their cost by $63 billion over the last decade. Two senior staff who questioned the administration’s policies were removed from their positions.

Without sufficient flow to sustain operations, the nine refugee agencies are having to cut staff and shutter offices, causing a brain drain and drying up relationships with smaller organizations and volunteers who help newcomers find jobs, use public transportation, find housing and register for school. Employers who used to recruit from the agencies are looking elsewhere. The bottleneck is felt in many communities. For example, this year the numbers of new arrivals has declined 70 percent in both greater New York and Washington, D.C.-Baltimore regions alone. Catholic Charities has already closed eight offices and plans to close another 14 this year. World Relief has closed seven. Lutheran Immigration and Refugee Services affiliates have laid off more than 100 of its staff. The agencies and their partners are struggling to survive. “Our fears are in a short period of time you can destroy something that’s worked very well,” said Paedia Mixon, CEO of New American Pathways, an Atlanta-based resettlement agency.

With bipartisan support, the USRAP has resettled more than 3 million refugees since 1980. The average annual cap exceeds 95,000 – with low points after 9/11 and two peaks of 200,000 under President Ronald Reagan. Cutting capacity limits the ability to quickly mobilize in a crisis, like past administrations responded to refugees fleeing Vietnam, Cuba, the former Soviet Union, Kosovo, Myanmar and Iran. “It’s a new low in our country,” said Carey, the former Obama official. “I think it will ultimately make the world less secure.”