South Sudan: A step towards peace 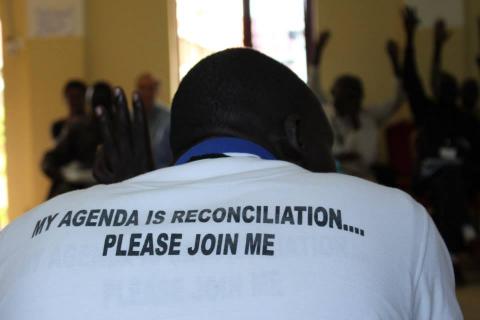 Since the political crisis that erupted in the capitol of Juba on December 15, 2013, these and other organizations have been working in close collaboration to create an environment for dialogue, peacebuilding and reconciliation throughout this nation of 11.3 million people; in early 2014, with that aim in mind, they created the National Platform for Peace and Reconciliation (NPPR).

In October 2014, CNHPR hosted an intensive four-week training program entitled A Step Together: Shared Journeys of Listening and Dialogue, which gathered more than 80 community and faith-based practitioners from the 10 states of South Sudan to share their knowledge and experiences. The participants learned concrete skills as well as theories and approaches to reconciliation. The workshops were facilitated by South Africa’s Institute for Justice and Reconciliation (IJR), with support from several international agencies including Catholic Relief Services. At the program’s graduation ceremony, Rev. Bernard Oliya Suwa, Secretary General of CNHPR, outlined both the accomplishments of the project and its plan of action for the next few years. He noted that the participants came with a common experience: the dehumanizing effects of the wars, whether recent or earlier ones. The ultimate goal of reconciliation, he stressed, is the daunting task of restoring the "humanness" of all people throughout the country.

Rev. Suwa told the participants that the step they had taken was the beginning of a process that demonstrated how South Sudanese people of various ethnic backgrounds can live together peacefully. Such an accomplishment was an attempt to find common ground, or as he put it, to dig a common grave where all hatred, anger, bitterness, suspicions, prejudices and mistrust could be buried. The next step is to move the program to the various states of South Sudan and to train at least 50 peace mobilizers in each state, who will then engage with the grassroots communities in the 86 counties that make up South Sudan. By 2016 South Sudan hopes to hold a National Conference for Peace and Reconciliation that will build consensus for an agenda for peace and reconciliation.

In challenging the newly trained peace mobilizers to look ahead, Rev. Suwa called on them to take off their "dark glasses" and to put on "new glasses" that would result in a new worldview that would view people from other ethnic groups not as poisonous thorns in their flesh but as human beings created in the image of God.

These exhortations by a South Sudanese religious leader are in stark contrast to the assessment of South Sudan’s situation given during a recent panel discussion at the Center for Strategic and International Studies in Washington, D.C. In the view of U.S. government officials, humanitarian experts and specialists in conflict analysis, South Sudan continues to face massive displacement, war, the thread of a major food crisis that is not weather related, endemic corruption and a leadership struggle over the spoils of the state.

All these factors underscore the need for a rapid political solution to the current crisis but as the rainy season ends, conflicts are resuming on the regional, national and local levels. It is not clear whether the international community now has the resources to stop the humanitarian food crisis in South Sudan because the global demand for such assistance is growing rapidly due to the Iraq crises and the Ebola outbreak.