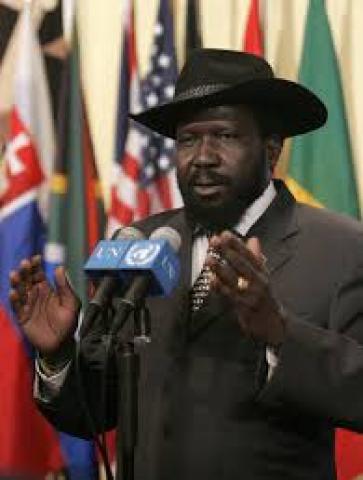 The following article appeared in the March-April 2014 NewsNotes.

For many the recent crisis in South Sudan has led to a feeling of disappointment; the great promise of a liberated nation seems to have dissolved into widespread violent clashes of unspeakable horror. While much of South Sudan is not caught up in violence, the conflict the broke out in late December 2013 grows wider by the week. Reports from the newest nation in Africa paint an increasingly depressing picture of violent clashes in several cities in the northern part of the country. Both the government and those seeking to overthrow the government have broken a recent cease-fire agreement.

Nevertheless, in the midst of what appears to be a tragic dissolution of their nation, countless South Sudanese are working daily to promote an end to the violence and to forge a pathway to peace and reconciliation. They are not waiting for the guns to fall silent before making plans for peace.

One such group is the Catholic Bishops Conference of Sudan. Even before the outbreak of the current cycle of violence, the bishops warned that, with the arrival of independence, it was no longer "business as usual" in South Sudan. By January 31, as the violence that had erupted in Juba spread to several other cities, the bishops went even further and issued a forceful pastoral exhortation entitled Let Us Re-found Our Nation on a New Covenant that boldly declared the vision of a free and democratic South Sudan had been shattered and that the nation needed a new foundation.

The Catholic bishops’ exhortation is based on their own experience as pastors. They describe the present situation of both Sudan and South Sudan as perhaps the gravest ever faced by the Sudanese people. According to the bishops, the blood of innocent victims – of murdered children and raped women – as well as the plight of 800,000 internally displaced people "calls out to God from the ground." They then list the many causes of the frightful violence engulfing parts of South Sudan: failure to deal with tensions within the governing party (the Sudan Peoples’ Liberation Movement, SPLM); poor governance that allows power to become concentrated and personalized in the hands of a few; corruption and nepotism; and negative narratives that serve to poison social relations.

The way forward in South Sudan will not be easy. According to the bishops, the present governing party needs democratic reform. Each side in the present conflict must have an opportunity to tell its side of the story openly and without the proliferation of negative narratives that only serve to inflame more violence. In addition to exhorting all sides to put down their weapons, the bishops are realistic in their prescriptions of what needs to be done. While reconciliation is always a hope, the bishops speak clearly about other steps that have to be taken before the space for reconciliation is created: peace through a cease-fire; truth-telling; justice which requires some restitution; and forgiveness and mercy. Their vision of how to resolve or transform the present conflict is much broader than a negotiated settlement or externally brokered peace accord.

A vital part of the exhortation concerns media reporting on the current crisis in South Sudan. Here the bishops are rather blunt: "We are critical of the conduct of both national and international media institutions." They condemn reports that are based on information which may not have been accurate because such reports may have inflamed violence and revenge attacks. But the exhortation is not all about condemning others. The bishops also commit themselves and their rather extensive resources to the rebuilding efforts that are necessary within the new nation. In particular, the bishops offer their Catholic radio network and other media resources to support the process of peace and reconciliation.

In the hardest-hitting section of their exhortation, they question why religious leaders have been excluded from peace talks in Addis Ababa, Ethiopia. They wonder why only military-led groups are invited and, without naming names, state openly that the present outbreak of violence is due to a handful of political leaders.

In the conclusion, the bishops declare that: "We are convinced that we stand at a decisive moment in the history of South Sudan. Fundamental choices must be made about how we deal with our past and present history, about how we govern ourselves as a nation, about how state institutions serve the poor. We must seize from the present crisis an opportunity to re-found our nation on democratic principles of dialogue, inclusion, and respect for diversity, God’s gift to humanity."

Sudan-South Sudan: Witnessing history through the end of war: The third annual civil society forum on Sudan and South Sudan was held in Addis Ababa in January 2014. Read more here.