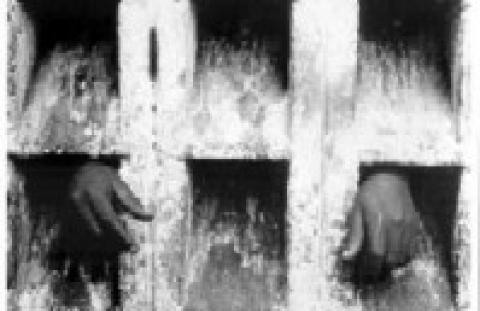 The following was written by Kelly Kundrat, an intern with the Maryknoll Office for Global Concerns, and was published in the November-December 2013 NewsNotes.

Solitary confinement within the United States prison system began at the Eastern State Penitentiary. This type of punishment originated from Quaker religious philosophies of natural healing with penitence and reform through isolation. The idea was individuals would use the time alone to reflect on the error of their ways and emerge with modified behaviors and attitudes. However, the practice of solitary confinement was abandoned—for a time—as cruel and ineffective. Isolation proved to be negatively modifying behaviors instead of positively promoting self-reflection. Individuals who experienced solitary confinement became psychologically destroyed and increasingly violent.

After September 11, 2001, solitary confinement reemerged as a main facet of the U.S. military detention facility at Guantanamo Bay, Cuba. In fact, a majority of those held in Guantanamo today are kept in prolonged isolation without due process. Camps 5, 6 and Echo are the units that qualify as solitary confinement within Guantanamo, although the facilities officials call them "single-cell occupancy" or "isolation" units. This punishment involves remaining in a 7x10x8 cell for 22-24 hours a day, with constant florescent lighting, a sink-toilet combination, a padded concrete slab for a bed and virtually no human contact. Many prisoners who experience prolonged solitary confinement complain of an inability to sleep and a slow disconnection from reality.

There are many troubling psychological and emotional consequences of solitary confinement, including anxiety, hallucinations, paranoia, and increased rates of self-mutilation and suicide. In an article published in The Guardian in 2007, Brent Mickum, attorney for prisoner Bisher al-Rawi, stated that al-Rawi was "slowly but surely, slipping into madness. Bisher is allowed no contact with fellow prisoners. Bright lights are kept on 24 hours a day. [He] is given 15 sheets of toilet paper per day, but because he used his sheets to cover his eyes to help him to sleep, his toilet paper - considered another comfort item - has been removed for ‘misuse.’" Bisher al-Rawi spent four years in Guantanamo. He was released on March 30, 2007 after enduring years of inhumane treatment without ever being charged for a crime.

In 2012, Juan Mendez, the UN Special Rapporteur on Torture, announced prolonged solitary confinement, lasting 15 days or more, constitutes torture. Mendez has called for "an absolute ban of solitary confinement of any duration for juveniles, persons with psychosocial disabilities or other disabilities or health conditions, pregnant women, women with infants and breastfeeding mothers as well as those serving a life sentence and prisoners on death row." By this definition, most prisoners at Guantanamo Bay have been subjected to torture.

In addition to the already troubling human rights violations at Guantanamo Bay (for instance, detainment without due process, forcible feeding, stress positions, etc.) the use of prolonged or indefinite isolation, deemed as torture by Juan Mendez, remains against international law. The Standard Minimum Rules for the Treatment of Prisoners (adopted by the United Nations in 1955) states, "Punishment by placing in a dark cell, and all cruel, inhuman or degrading punishments shall be completely prohibited as punishments for disciplinary offences. … All accommodation provided for the use of prisoners and in particular all sleeping accommodation shall meet all requirements of health, due regard being paid to climatic conditions and particularly to cubic content of air, minimum floor space, lighting, heating and ventilation." These UN guidelines for international and domestic law are clearly being violated within the Guantanamo Bay detention facility.

Beyond human rights and international law violations, the use of solitary confinement within Guantanamo violates our faith. In their 2000 pastoral letter, Responsibility, rehabilitation, and restoration: A Catholic perspective on crime and criminal justice, the U.S. Catholic bishops stated, "We oppose the increasing use of isolation units, especially in the absence of due process." This past June, the Catholic bishops of California released a statement opposing the use of solitary confinement: "We stand opposed to this treatment because it is not restorative. Placing humans in isolation […] has no restorative or rehabilitative purpose. International human rights standards consider more than 15 days in isolation to be torture."

This year’s Human Rights Day, December 10, marks Human Rights Day, the 65th anniversary of adoption of the UN Declaration of Human Rights. The National Religious Campaign Against Torture invites you and your congregation/organization to observe Human Rights Day during worship services, as a part of your religious education efforts and through advocacy activities during either the weekend of Dec. 6-8, Dec. 13-15, or another time of your choosing. Find a toolkit of resources here.