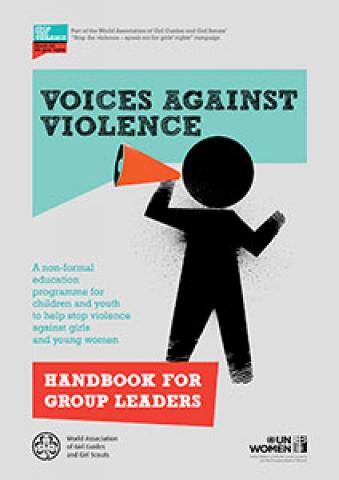 Voices Against Violence: This 124-page educational handbook, with curriculum, is from the World Association of Girl Guides and Girl Scouts (WAGGGS) and UN Women. Designed for various age groups ranging from 5 to 25 years, it provides young people with tools and expertise to understand the root causes of violence in their communities, to educate and involve their peers and communities to prevent such violence, and to learn about where to access support if violence is experienced.

National Migration Conference, July 7-10: Hosted by the U.S. Conference of Catholic Bishops’ Migration and Refugee Services (USCCB/ MRS), the Catholic Legal Immigration Network (CLINIC), and Catholic Charities USA, the National Migration Conference will be held in Washington, D.C. from July 7-10. The conference is intended to build the capacity of the Catholic Church and society to advance the life and dignity of the human person in our work with immigrants, migrants, refugees, unaccompanied migrant children, victims of human trafficking, and other vulnerable people on the move.

Border Songs: This 31-track double CD, in English and Spanish, includes recordings from a variety of artists including Pete Seeger, among others. Spoken word on the album includes a dramatic reading by Chicana performer Denise Chávez, excerpts from an interview with Charles Bowden and an animal fable by M. Henry that will both entertain a child and inspire an adult to think. All proceeds will be donated to No More Deaths, a volunteer faith-based organization that places water in the Arizona desert. Each album sold provides 29 gallons of water, or the equivalent in food, medical supplies or blankets to people in extreme need. This diverse collection of border songs is held together by a common thread—a deep concern and solidarity for migrants and for people of all ethnicities, regardless of their country of origin. $28.96+shipping.

Latin America Working Group (LAWG) publications: LAWG has several resources available on topics ranging from U.S. military intervention in Latin America to the cost of the ongoing U.S. embargo against Cuba. New publications include Perilous Journey: Kidnapping and Violence against Migrants in Transit through Mexico: Five years ago, advocates at migrant shelters along the south-north train route began to document and gather first-hand accounts of migrants who had survived kidnapping. These accounts give a fuller picture of the depth of this humanitarian crisis and steps that authorities on both sides of the border can take to prevent and bring justice to this horrific violence that has traumatized migrants and their families across the region; and Time to Listen: Trends in U.S. Security Assistance to Latin America and the Caribbean: While military-to-military relations remain robust, the U.S. diplomatic efforts are flagging in Latin America and the Caribbean. Much of it has to do with a failure to listen to Latin American leaders’ growing calls for change. Crammed with statistics and graphics, Time to Listen guides readers through today’s trends on the U.S. security relationship with Latin America.

China’s Congo Plan: What the Economic Superpower Sees in the World’s Poorest Nation: This e-book by Jacob Kushner probes the Africa-China relationship. DR-Congo is known for its poverty and conflict, but it is home to an enormous wealth of buried minerals. Already, tens of thousands of Chinese people now work there, digging and processing ore. Today, two Chinese state-owned companies are opening the biggest mine DRC has ever seen, spending billions of dollars to build new roads and modernize Congo’s infrastructure. Available from iTunes, Barnes & Noble, Amazon and Kobo.