Reasons for optimism on clean energy 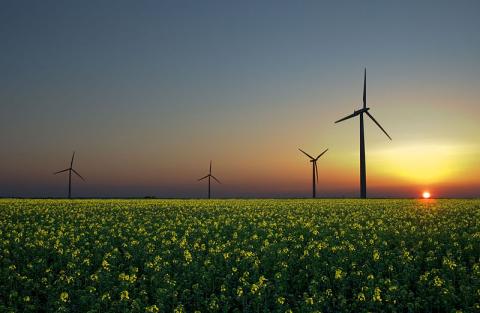 The following article appeared in the November-December 2013 NewsNotes; it was prepared by Dave Kane, an MOGC staff member who lives in Brazil. Read a related article in the October 31, 2013 Washington Post: In Brazil, the wind is blowing in a new era of renewable energy.

The U.S. Department of Energy recently released its International Energy Outlook (IEO) that attempts to predict future energy use if "business as usual" prevails. It calculates that in 2040, fossil fuels will still supply almost 80 percent of the world’s energy with coal, the most carbon-intense of all major fuels, supplying more energy than renewables, nuclear and hydropower combined. This would imply an increase in global carbon emissions of 46 percent between 2010 and 2040. As one reviewer wrote, "If the trends identified in the Department of Energy report prove enduring, then the world of 2040 will be one of ever-rising temperatures and sea levels, ever more catastrophic storms, ever fiercer wildfires, ever more devastating droughts."

Yet the IEO overlooks a number of significant changes. In some locations, rooftop solar panels are already a cheaper option than traditional utilities. Electric vehicle technology is also quickly becoming a cheaper option than gasoline-driven vehicles. In addition, financial markets are increasingly bearish on fossil fuel companies due to the fact that 70-80 percent of their fossil fuel reserves may never be able to be used if we are to maintain global warming to two degrees Celsius. (See related article here and in the September-October 2013 NewsNotes.)

Tony Seba, lecturer on entrepreneurship, market disruptions and clean energy at Stanford University, predicts that by 2030, solar energy will make the fossil fuel industry redundant and that electric vehicles will do the same to the oil industry. He bases his estimates on the rapidly falling cost of solar panels and electric vehicle (EV) batteries combined with rising prices for fossil fuels.

In the case of EV batteries, affordable technology was thought to be decades away, but thanks to recent innovations, they are rapidly dropping in price and increasing in potency. Seba writes, "The tipping point for the mass market to move from internal combustion engines to EVs is between US$250 and US$300/kWh. Once it gets to US$100/kWh, it is all over. I think we will get to US$250/kWh by 2020. By 2030, when batteries are at $100/kWh, gasoline vehicles will be obsolete. Not on their way out, obsolete." He thinks that mass migration will start around 2018 to 2020.

At one point, it was difficult to replace fossil fuel utilities with rooftop solar due to the lack of affordable high-quality batteries to store energy for nighttime hours or cloudy days. This technical challenge has been overcome, and a revolution in home energy delivery, with dozens of centralized fossil fuel power plants being quickly overtaken by solar panels, is taking place in countries like Germany and Australia. Even Bangladesh, with its severe poverty, has more than a million solar installations – without any subsidies. Solar is already cheaper than the grid in dozens of countries, leading the Swiss financial giant UBS to recommend that investors sell stock in any power utilities using coal or gas-fired generation. Centralized fossil fuel-generated energy in Europe "is in structural decline," and this decline is taking place at "remarkable" speed.

Jon Wellinghoff, chairman of the Federal Energy Regulatory Commission (FERC), which regulates utilities in the U.S., predicts the same in this country, saying, "Solar is growing so fast it is going to overtake everything," adding, "at its present growth rate, solar will overtake wind in about 10 years. It is going to be the dominant player."

Financial markets see the writing on the wall and are reconsidering the value of fossil fuel companies due to "risk of stranded assets," which is the risk that they will be stranded with large reserves of fossil fuels that cannot be burned. This "carbon bubble" will pop some day. The question is not if it will, but when. One study found that, "regardless of what government actually does, the market will at some point respond to the political and commercial risk of the potential for government to act… Markets could react to this predicament next month, next year or in 2014. We can’t know exactly when, but logic suggests there could be serious traction gained at some point over the next five years that will lead to carbon-induced financial disruption on a global scale."

The reckoning has already started: British multinational bank HSBC has predicted a market value loss of 40-60 percent for major oil and gas companies if the world acts to keep global warming below two degrees. The International Energy Agency has forecast that the global coal industry will lose $1 trillion in revenue each year by 2035.

While UN summits and other international forums about climate change appear to be failing, the technologies and economics of renewable energy are rapidly changing possibilities, offering a glimpse of hope that humanity may be able to avoid surpassing the two degree rise in temperature and dodge the worst of climate change effects.