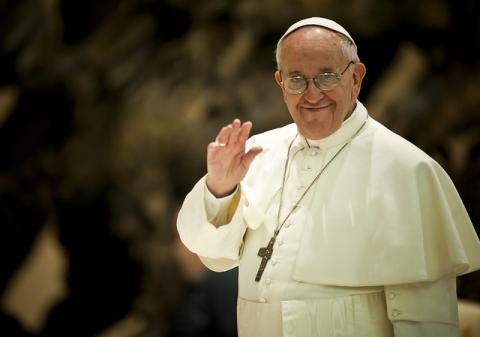 The following reflection by Fr. Dave Schwinghamer, MM was published in the November-December 2013 NewsNotes.

On July 1, over 300 Eritrean and Somali asylum-seekers drowned one half mile from the coast of Italy. When their fishing boat caught fire and sank near the island of Lampedusa they had travelled between 2,500-3,000 miles from their home countries in the Horn of Africa. The news of this tragedy moved Pope Francis to make a personal visit to Lampedusa to offer his sympathy and to show his solidarity to the survivors and to the Italians who pulled them from the Mediterranean Sea. In a short but moving homily during a mass for those who had drowned, Francis called attention to one of the major challenges of the 21st century: the growing indifference to human suffering that has arisen in part as a result of globalization.

During the closing decades of the 20th century the Catholic Church’s perspective on globalization reflected two important contributions by very different popes. On January 1, 1972 in his World Day of Peace message, Paul VI declared: "If you want peace, work for justice." This clear call to expand the Church’s understanding of its social commitment helped many Catholic organizations realize that action on behalf of justice was a constitutive part of preaching the Gospel. In 1974 the Church held a global synod on the theme of Justice in the World. The fruits of that Synod are still being harvested.

During his long pontificate Pope John Paul II was a strong advocate of "the globalization of solidarity." He openly called for a new international system of values based on solidarity as opposed to a system of values that had competition as its backbone. In a message written for the 17th General Assembly of Caritas International, John Paul II called for a radical change in the concept of solidarity at the global level. For the aging pope, globalization had become the obligatory horizon of all politics in every nation. But according to John Paul II for solidarity to become a global reality, peoples of all regions of the world must be taken into account.

Pope Francis has moved beyond the perspectives of his predecessors in regard to globalization. His visit to the island of Lampedusa helped lay open a dark side of globalization that is not talked about enough today. This ugly side of globalization flows from both the effects of the new communication technologies on our human personality and from the consumer culture that accompanies globalization. While addressing those who had survived the sinking of their little fishing boat, Francis spoke of what he called a culture of comfort that makes us live in a bubble that insulates us from human misery and can cause us to fall into indifference on a global scale.

In lamenting the needless deaths of African asylum seekers – both Christians and Muslims – Francis asked us to weep for "all those who in anonymity make social and economic decisions which open the door to tragic situations" like Lampedusa. Likewise, he begged God to have mercy on those who "by their decisions on the global level have created situations that lead to these tragedies."

But it isn’t just weeping and lamenting that Francis is concerned with. He intends to expose some of the hidden forces and underlying values, such as unbridled consumerism, that are shaping the interior world of many people in such a way that we are becoming incapable of even being moved by tragedy. These forces operate out of sight under the mask of anonymity and superficiality of thought and lead to a cultural disorientation. The pope asks us: "How many of us, myself included, have lost our bearings; we are no longer attentive to the world in which we live; we don’t care; we don’t protect what God created for everyone, and we end up unable even to care for one another!"

In a gentle but prophetic manner, Francis calls out those who have caused the Lampedusa-like tragedies by asking who is responsible for the blood of these brothers and sister of ours. Unfortunately, it seems that nobody feels responsible. The bubble of material comfort, a potent byproduct of globalization, has resulted in the illusion that such tragedies can take place and nobody is to blame. But Francis also implies that this is a superficial answer. Behind this growing anonymity are human beings who make social and economic decisions on the global level and that these decisions have created situations that lead to tragedy for those on the margins of globalization.

After Lampedusa we can no longer look at asylum seekers, migrants, refugees and internally displaced peoples as unconnected to the process of globalization. To do so would be to continue to live in a bubble.