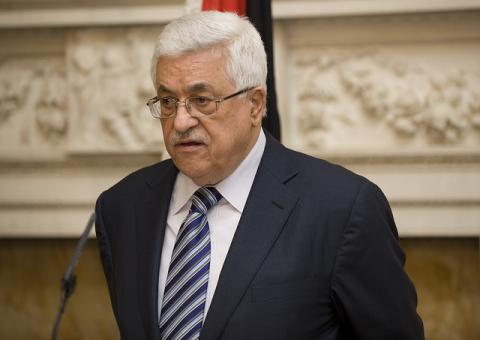 The following article was printed in the January-February 2015 issue of NewsNotes.

In what some describe as a desperate move, Palestinian President Mahmoud Abbas (seen in photo at right) and the Palestinian Authority pushed a UN Security Council vote on December 30 on a resolution that would have put in place deadlines for a negotiated peace agreement with Israel within one year and the removal of all Israeli occupying forces from Palestinian territory by 2017. The draft resolution introduced by Jordan on behalf of Palestine and supported by all 22 Arab states was defeated in the UNSC with eight votes in favor, two against, and five abstentions. Unsurprisingly, the United States was one of two votes against the resolution and Secretary of State John Kerry was instrumental in the defeat, reportedly making 13 phone calls to member countries prior to the vote asking for negative votes or abstentions. It is assumed that if the resolution had passed, the U.S. would have exercised its veto power as a permanent member of the UNSC to defeat the resolution anyway, though at a time when the U.S. is relying heavily on its Middle East coalition to combat the self-proclaimed “Islamic State” in Iraq and Syria the veto could have caused a rift. Fortunately for Secretary Kerry and the U.S., this was unnecessary as Nigeria decided in the final hour to abstain after President Goodluck Jonathan received personal calls from Secretary Kerry and Israeli Prime Minister Benjamin Netanyahu. Although the U.S. has also repeatedly called for a negotiated settlement that would include a sovereign state of Palestine, their position on the resolution is that a “return to the [negotiating] table” is the solution, not “unilateral action.”

President Abbas has been promising to introduce this Palestinian statehood resolution to the Security Council for months, after U.S.-mediated negotiations with Israel broke down last spring followed by Israel’s military action “Operation Protective Edge” in Gaza which left over 2,100 Palestinians and 73 Israelis dead over the summer. In November Abbas told a Churches for Middle East Peace delegation that he was waiting for Secretary Kerry to return his calls – he was ready to return to the negotiating table with Israel as soon as the opportunity arose – but he also made clear that in the absence of peace talks the Palestinian government had every intention of moving forward on their own towards independence from Israeli occupation.

The day after the defeat of the UNSC resolution Abbas followed through with another promise and ratified 20 international agreements including the Rome Statute of 2002, the governing document of the International Criminal Court, with the intention of joining the ICC. The U.S. claims that Palestine cannot become part of the ICC because it is not a state, but UN Secretary General Ban Ki-Moon has already announced that Palestine would officially become an ICC member as of April 1. As a member, Palestine will be able to refer cases of crimes against humanity and international war crimes to the court for investigation and has already submitted evidence against Israel as of January 2. Palestinian Chief Negotiator Saeb Erakat reports that the documents pertain to events in Gaza in 2014, illegal settlement expansion in the West Bank as well as Palestinian land seized during the 1967 war that remains under Israeli control.

Israel’s ambassador to the UN was not present in New York for the UNSC vote. Foreign Minister Avigdor Lieberman called the resolution a “Palestinian gimmick” and an “act of aggression,” in which the “sole aim is to attack Israel, with no benefit for the Palestinians.” Netanyahu called a meeting following the vote where it was decided that the Israeli government would withhold a deposit to the Palestinian government of 500 million shekels (over $125 million) of tax revenue collected on behalf of Palestine. While the loss of much-needed funds could be extremely detrimental to the Palestinian Authority, Abbas will not be deterred: “Now there are sanctions – that’s fine. There’s an escalation – that’s fine ... but we’re pushing forward.” Palestine’s chief negotiator Saeb Erekat elaborated: “If Israel thinks that through economic pressure it will succeed in diverting our approach to freedom and independence, then it is wrong,” Erekat said. “This money is not Israeli charity to the Palestinian people…This is the money of the Palestinian people and Israel is not a donor country.” Israeli Minister of Energy and Water Silvan Shalom suggested that Palestinian tax funds should be used to repay debt owed by Palestinians for past due electricity bills, since currently 95 percent of electricity in the West Bank and 75 percent in Gaza comes from Israel. Israel’s ability to withhold Palestinian tax revenue and control over Palestine’s utilities such as electricity are part of ongoing aggravations of the occupation that spurred the Palestinian Authority to make their case to the international community rather than continue to wait for Secretary Kerry’s phone call.

While U.S. Ambassador to the UN Samantha Power called the Palestinians’ statehood resolution “deeply unbalanced” and “set[ting] the stage for more division, not for compromise,” it is clear to the majority of the international community where the imbalance lies in the situation with Israel and Palestine. Dozens of UN General Assembly resolutions have passed using strong language condemning Israel’s continued violations of human rights against the Palestinian people. Five resolutions were passed on November 25 by the UNGA, including Resolution 69/23 (with a vote of 147-7-9), which "stresses the need for the withdrawal of Israel from the Palestinian territory occupied since 1967, including East Jerusalem." An additional eight resolutions related to the Palestine situation were passed on December 5, which included unequivocal language that the international body is "convinced that occupation itself represents a gross and grave violation of human rights" (Resolution 69/90, vote of 88-9-79) and "demands that Israel, the occupying power, cease all practices and actions that violate the human rights of the Palestinian people, including the killing and injury of civilians, the arbitrary detention and imprisonment of civilians, the forced displacement of civilians, and the destruction and confiscation of civilian property." (Resolution 69/93, 158-8-11) A majority of states voted in favor of each of these resolutions, but the United States did not vote in favor of a single one.

In defense of the U.S.’s vote against the Palestinian resolution at the UNSC, Ambassador Power noted that the U.S. has invested more in recent years to the peace process between Israel and Palestine than any other country – though some might say that the U.S.’s voting record at the UN sends a different message.

Riyad Mansour, Palestine’s representative to the UN, said in response to the defeat: “The repeated requests for us to ‘wait,’ and ‘wait,’ and ‘wait’ while our people are suffering, while our people are besieged, while our land is being colonized, and while the two-state solution is being destroyed and the prospects for peace are evaporating, must understand that such requests are not viable under these circumstances and are unsustainable…. [It is] most regrettable that the Security Council remains paralyzed.”