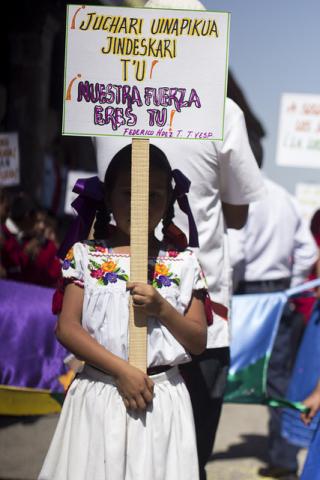 The following article, published in the May-June 2015 NewsNotes, was written by Marek Cabrera, an intern with the Maryknoll Office for Global Concerns.

This April 15 was the fourth anniversary of a very peculiar, and largely unnoticed, “citizen uprising” in Cherán, a small indigenous town of 20,000 residents in the state of Michoacán, México, that has dramatically reduced its previously widespread drug trafficking-related violence. For many years, the local drug cartel, the Knights Templar, had extorted, tortured, disappeared and/or killed residents of Cherán, all with the cooperation of corrupt local and regional authorities who also benefited both from the drug business and from illegal logging in the nearby forests. The transformative experience in this small town is not only relevant because of the lessons it can teach communities that still suffer similar levels of violence in other parts of Mexico and Central America. It also demonstrates an important and powerful principle that is seldom discussed about reducing violence in the region: direct local participation of residents in their own community’s safety. “Guarda Bosques” (“Forest Keepers”), a 2013 documentary by a Mexican American journalist based in Cherán, outlines this story in the words of the people who participated in those events. (The filmmaker requests anonymity due to ongoing death threats.)

In April 2011, women started it all with a bold act of protest against the cartel’s illegal logging in areas the community reveres. That morning they used their own bodies and their children to attempt to stop the large trucks of the illegal loggers as they drove through town on their way to the forest. When the loggers tried to run over them, the entire community rose up and burned the cartel’s trucks. The police tried to protect the loggers, which further enraged and mobilized the community. The corrupt political authorities fled, as did the police and the Knights Templar, the drug cartel.

In order to prevent the return of the purveyors of violence, the community residents closed all the access points into the town by setting up bonfires. A group of volunteers quickly formed rondas comunales, a traditional form of self-defense, to protect the town’s residents, the forest and their source of water. After working to guarantee a level of local citizen security, the community was able to effectively organize further by relying on their own indigenous concepts of communal life and governance.

The first step they took was to call a general assembly to select a council of elders to oversee the town’s affairs, especially that of security. According to “Guarda Bosques,” that was only the beginning of a much more successful period of community activism that has turned Cherán into an example of participatory resistance, organization and, most importantly, provided a level of peace the residents had not enjoyed in a long time.

In the film a young indigenous woman tells of her experience walking home every night after work and feeling safe for the first time knowing that in every corner there will be a small bonfire with members of the rondas comunales, who are her own neighbors. The bonfires have become a powerful symbol of participatory security where residents organize themselves to identify collectively the needs of their specific neighborhoods. The results have been nothing short of stunning. One of the elders in the film makes an important distinction: “The police [is] what the state imposes on us from outside, but the rondas comunales is what emerges from the community itself.”

The documentary also makes clear that after the drug trafficking-related violence ended and the community began organizing itself politically by relying on their own indigenous traditions and customs – no political parties, most importantly – a renewed form of participatory development emerged. The first communal, non-commercial radio station, Radio Fogata (Radio Bonfire), was inaugurated, operated by local youth, men and women. In 2015 they have been able to start their own television station. A young indigenous man in the film notes that these means of communication are their “new weapons” and that they are the opposite of guns in that they do not seek to destroy, but rather to build through the power of ideas.

Some forms of indigenous culture, including language and dances, which in the past had been suppressed by political and religious authorities, are flourishing again. The former Palacio Municipal de Cherán (Municipal Palace) is now a Casa Comunal, a name much more representative of their form of self-governance. Long-held macho attitudes are being questioned, and the institutions on which they rested, being eroded. The young openly form groups around common interests without being harassed, recruited or killed by the cartels. As the director of the film said during a recent presentation at American University: Once you remove the violence of the corrupt Mexican state from the communities, a whole new dynamic of peaceful social relations can emerge when the residents themselves participate in their self-governance and self-defense.

Four years after the uprising, Cherán continues to be an example to other communities in Mexico that seek to rid themselves of the drug cartels who operate there, in many instances, from within the government. Many communities have managed to achieve some level of control of the violence, but much more is needed. The disappearance of the 43 indigenous students in Ayotzinapa at the hands of drug cartels and the local authorities is a powerful reminder of the corrupt nature of the Mexican government, and the risks that communities like Cherán still face at their hands. For now, this community is enjoying significant citizen security and participatory development, and the national government has recognized their general council of community elders as the legitimate authorities. It is important, however to remain vigilant as there are powerful voices in the government calling for the violent takeover of this town.

Watch the 45-minute documentary "Guarda Bosques" (in Spanish with English subtitles) on YouTube. Learn more through http://www.elenemigocomun.net/, an English-language news site based in Cherán.

Photo: April 2014: A girl participates in a march commemorating the anniversary of the Cherán uprising; photo by Kinoluiggi, used courtesy of Creative Commons licensing.