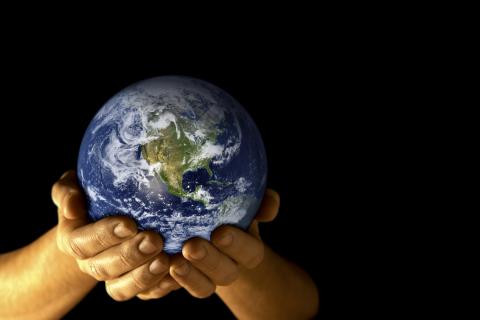 "Praised be You, my Lord, through our Sister Mother Earth, who sustains and governs us, and who produces various fruit with colored flowers and herbs. …" – St. Francis of Assisi

June 18, 2015 – The Maryknoll mission family celebrates the publication of "Laudato Si’" ("Praised be: On the care of the common home"), Pope Francis’ letter to the people of God that calls for a greater understanding of the integration of human ecology and our planet, identifies human activity as a primary source of climate change, and urges a conversion to a lifestyle of greater simplicity.

Over the years, through their service to and lived experiences with indigenous peoples and marginalized communities, Maryknollers have come to recognize the critical need to protect Earth and its many gifts. The Maryknoll Office for Global Concerns, which advocates and educates on issues that affect Maryknollers and the people they serve, has highlighted climate change as a real and urgent threat to Earth’s people, especially the most vulnerable who have done the least actual damage. We are grateful to have this social teaching of the Church clarified by the Holy Father in this official encyclical – every pope in the past 50 years has raised the moral dilemma of humankind’s destruction of the earth; Popes John Paul II and Benedict XVI both decried environmental degradation.

“We need to strengthen the conviction that we are one single human family. There are no frontiers or barriers, political or social, behind which we can hide, still less is there room for the globalization of indifference.” – Pope Francis, Laudato Si’

As voluntary migrants who choose to leave home and travel far to serve God’s people, Maryknollers have often had to learn new and sometimes uncommon languages. In that light we applaud the allusion behind the encyclical’s title: "Laudato Si’" is taken from St. Francis of Assisi’s Canticle of the Creatures, a 13th century prayer that celebrates all the aspects of God’s creation. Unlike most Christian prayers at the time which were written in Latin, St. Francis’ hymn of praise was composed in an Umbrian dialect, a language of the common people, and clearly meant to communicate most directly to them.

More than remarks to the press or a simple statement, a papal encyclical is part of the official doctrine of the Church, and as such calls on all Catholics to examine their lives in light of this social teaching of the Church. We hope all people of good will who care for the future of our planet will be inspired by this call for "ecological conversion." In the coming weeks we will offer our reflections on this letter and the observations and insights of Maryknoll missioners on the impact of climate change upon the marginalized and vulnerable communities whom we serve around the world.

See also: The Encyclical Launch, an Appeal to be Heard, a commentary by Fr. John Brinkman, MM