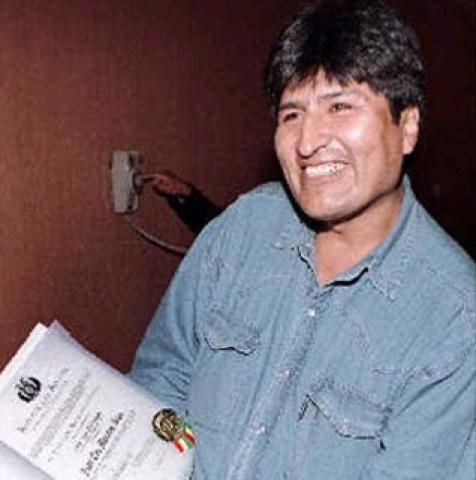 The following article appeared in the November-December 2013 NewsNotes.

In late September, when world leaders gathered at the 68th UN General Assembly, the media’s focus was on the situation in Syria and the potential international conflict there. What they overlooked was the outpouring of disappointment and anger from Latin American leaders toward the U.S. because of a number of offensive actions that the U.S. had taken in previous months. The outcries are signs of the deteriorating relations between the U.S. and its southern neighbors.

On July 2 four European governments (France, Italy, Portugal and Spain) refused to allow a plane carrying Bolivian president Evo Morales to land or refuel within their borders as he returned from an energy conference in Moscow. Spokespersons from those countries reported that U.S. officials had informed them that the plane carried Edward Snowden, the former contractor for the National Security Agency who disclosed classified documents revealing massive global surveillance programs being carried out by U.S. intelligence agencies. The reports on Snowden’s presence on the plane turned out to be false; the episode infuriated many South American presidents who called an emergency meeting on July 4 of the Union of South American Nations (UNISUR) to determine the appropriate response.

At the July 4 meeting, Evo Morales proposed that all of the governments present expel U.S. ambassadors from their countries and discussed the possibility of launching international legal proceedings against Barack Obama for his "repeated violations of international law and diplomacy." Initially, Latin American leaders discussed boycotting the UN Assembly in protest, but instead decided to use the world stage to rebuke the U.S.

Brazilian president Dilma Rousseff, who gave the opening speech at the Assembly, set the tone with an impassioned discourse against the U.S. spying program, calling it "totally unacceptable ... Meddling in such a manner in the lives and affairs of other countries is a breach of international law and, as such, it is an affront to the principles that should otherwise govern relations among countries," adding that her country would create new legislation and technology to protect it from illegal espionage like that being carried out by the U.S.

On October 24, Brazil joined with Germany to propose a UN General Resolution to promote privacy on the Internet, a clear response to the U.S. surveillance programs. At least 19 countries, including traditionally close U.S. allies Mexico and France, are said to support the resolution.

In his speech to the Assembly, Evo Morales went further, calling for the UN headquarters to be moved from the United States to a politically neutral country, or if that was not possible, "the summit should be held in a different venue every year, but not in the United States, where we don’t feel safe." Venezuela’s president Nicolas Maduro, who did not participate in the UN Assembly, agreed with the idea of moving the UN headquarters, through the speech of Foreign Minister Elias Jaua.

Morales also proposed the creation of "a Peoples’ tribunal" to try Obama for crimes against humanity, citing the examples of the war in Iraq, the bombing of Libya, the promotion of acts of international terrorism, and the financing of terrorist groups. "I would like you to be aware that the United States harbors terrorists and the corrupt. They take refuge here, and the U.S. does not help in the fight against corruption," Morales stated.

Another theme of the speeches of many Latin American leaders was the failed drug war being pushed by the United States. Even traditionally strong allies such as Colombia, Guatemala, Costa Rica and Mexico spoke out against the U.S.’s policy of a police and military-centered response to drugs, indicating the beginning of the end of the unpopular, and unproductive, policy.

Colombia’s president Juan Manuel Santos stated, "Today, we must acknowledge that war [on drugs] has not been won… I say this as the president of the country which has suffered more deaths, more blood, more sacrifices in this war."

Despite the U.S.’s continued efforts to maintain the repression-oriented drug war, it is clear that many other countries are exploring new policies. Costa Rica’s president Laura Chinchilla referred to a regional agreement "to reevaluate internationally agreed-upon policies in search of more effective responses to drug trafficking, from a perspective of health, a framework of respect for human rights, and a perspective of harm reduction."

Unfortunately, these strong statements from Latin America, mostly overlooked by the media, were also ignored by the Obama administration, to the detriment of all. Laura Carlsen, director of the Americas Program of the Center for International Policy, describes Obama’s tone-deaf diplomacy well: "The U.S. government continues to play the neighborhood bully long after the kids on the block have grown up. The flurry of state visits to the region have generally aimed to reinforce unpopular policies, including the drug war and free trade, rather than listen to the calls for change."