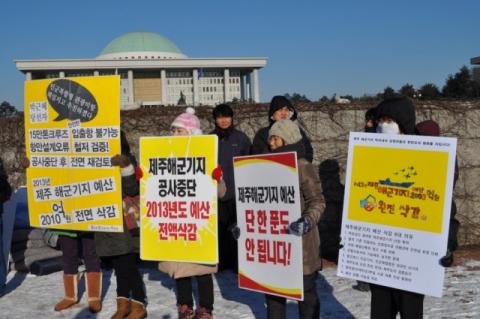 The following is based on an article written by law professor Shin Yong-In and published on the website of Save Jeju Now, the campaign to end the construction of a naval base on Jeju Island, South Korea. Opponents of the base, which include most residents of the island, fear its construction would inflict significant environmental damage to the fragile ecosystem, not to mention that it would increase tension between South Korea, its ally the U.S., Japan and China.

According to Korean law, the navy cannot maintain construction of the base without allocated funds; the monies are first budgeted by the Ministry of Strategy and Finance, and then distributed by the National Treasury. Any construction done without an allocated budget or funds is considered illegal.

Prof. Shin writes that the Ministry of Strategy and Finance was to allocate the funds only after the navy submitted a previously requested report to the National Assembly.

But the navy already has instigated construction this year, despite the fact that the funds have not been allocated, technically making the work illegal; according to Prof. Shin, the construction companies cannot receive payment after the fact. He writes, "It becomes a construction for free, not a construction on credit."

"To summarize again," Prof. Shin writes, "there was no budget allocation [for] 70 days and there will be no allocation of funds during the period. Then how can they do construction? Does the navy personnel plan to make it up with their private money?"

According to Prof. Shin, the current construction work on the naval base is clearly illegal, therefore those who have been arrested in the ongoing civil disobedience actions – including several Catholic priests – are not guilty. "For a charge of obstruction of business to be established," Prof. Shin writes, "the business should be a just business. However, since construction … without allocation of budget or funds is illegal, it is not a just business. Therefore, the charge of obstruction of business cannot be established."

Learn more about the campaign to stop the construction of the naval base at SaveJejuNow.org.