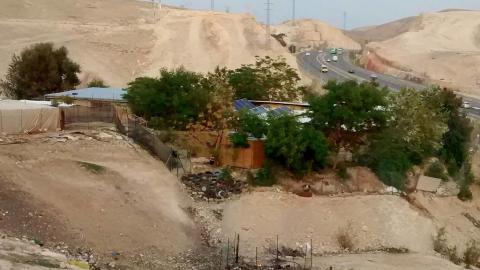 Israeli authorities postponed the demolition of the Bedouin village Khan-al-Ahmar as Palestinians striked along the West Bank. This article was published in the November-December 2018 issue of NewsNotes.

The Palestinian village of Khan al-Ahmar in the West Bank of the Occupied Territories has been under threat of demolition by the Israeli government for nearly ten years, ever since the European Union, Belgium, Italy and Italian NGO Terra di Vento built a school out of tires and mud in the village which now serves 150 children from the surrounding area. The school, along with the residential and other structures in the village, were in fact built without obtaining building permits from Israel – however, building permits for Palestinians in “Area C” are seldom, if ever, approved. This is a common tactic used by Israel to justify restricting development in Palestinian villages and demolishing Palestinian homes.

Khan al-Ahmar is a village of around 180 people in the unfortunate position of being geographically located in an area where Israel intends to expand its illegal settlements from Jerusalem eastward until they reach the Jordanian border and the Dead Sea, severing the West Bank into two separate territories and effectively precluding the possibility of East Jerusalem as the capital of a future Palestinian state.

In 2017 Israel announced that the villagers must relocate to a site next to a garbage dump to make way for demolition of Khan al-Ahmar, prompting nonviolent demonstrations and a petition on behalf of the villagers to Israel’s Supreme Court to stay the demolition order. In September, the Supreme Court determined that it would not interfere and allowed the eviction to continue.

In response, the international community, including government bodies, UN representatives, the International Criminal Court and religious groups put pressure on the Israeli government to take heed of international law which forbids forced relocation of residents in occupied territories – pressure which seems to have been effective, though perhaps only temporarily. On October 21, Prime Minister Benjamin Netanyahu announced a temporary halt on evacuation and demolition of Khan al-Ahmar to allow more time for an agreement to be reached with villagers about the relocation site.

See pictures of nonviolent witness by international supporters with Khan al-Ahmar villagers on October 1at http://bit.ly/KhanalAhmar

Photo: The internationally-funded and eco-friendly school building for the Khan al-Ahmar community in the West Bank, 2015. Photo by TrickyH [CC BY-SA 4.0] from Wikimedia Commons.