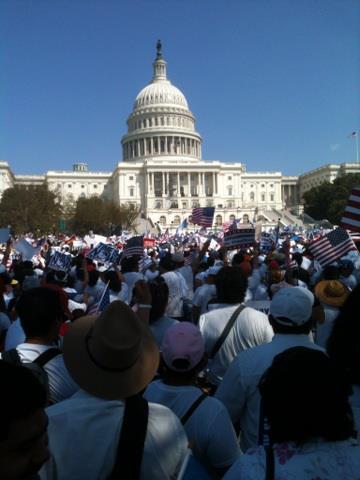 On June 27, the U.S. Senate passed S. 744, the Border Security, Economic Opportunity, and Immigration Modernization Act. In this highly polarized Congress, it is worth acknowledging that a bill that provides assistance for undocumented immigrants has progressed at all; however, S. 744 was crafted with tremendously painful compromises, particularly in regards to the militarization of the U.S.-Mexico border.

According to the Interfaith Immigration Coalition, S. 744 "includes provisions that would create a 13-year path to citizenship for undocumented individuals who entered the U.S. before January 1, 2012 and meet other eligibility criteria. The bill would put in place a stay-of-removal so that qualified individuals are not deported before implementation begins. Individuals who qualify for the pathway to citizenship could include their spouse and children (under 21) in their application, so that families can go through this process together. ... DREAMers – in this bill, individuals of any age who entered the U.S. before they turned 16 – and agricultural workers would also have a shortened pathway to citizenship.

"However, ... citizenship would be contingent upon border and interior enforcement ‘triggers.’ Within six months of enactment, the Department of Homeland Security (DHS) would have to submit border security plans to achieve 90 percent effectiveness in apprehensions and returns through additional fencing, surveillance, technology and personnel. ... DHS must then certify that these plans have been implemented, additional border fencing is constructed, 20,000 additional border patrol officers are hired, an employment verification system is being used by all employers, and an electronic entry/exit system is fully operational ...

"This bill would improve the lives of refugees and asylum seekers and make much needed improvements to the asylum and refugee systems. It would also reunite many immigrant families by clearing visa backlogs, recapturing unused visas, and categorizing spouses and children of green card holders as ‘immediate relatives.’ However, the bill would eliminate, 18 months after enactment, the ability for U.S. citizens to sponsor their brothers, sisters, and children who are married and over the age of 31. The bill would also militarize the border with officers, fencing, technological machinery, and the National Guard, and spend additional billions on border and interior enforcement."

The American Friends Service Committee (AFSC, the Quakers) released a statement on June 27 in response to the bill: "While the bill creates a narrow path to citizenship for some and makes modest progress on some worker rights issues, it not only reproduces but dramatically expands upon many of the current failed immigration policies, making it a far cry from the just and humane reforms that immigrant communities, faith, labor, and advocacy groups have been calling for.

"‘The Senate bill ... would not end the current cruel, costly, and inefficient system of detention and deportation, and it provides for astounding investments in the border militarization industrial complex—meaning billions for defense contractors and continuing crises for people on both sides of the border,’ said Adriana Jasso of AFSC’s San Diego program.

"‘The path to legalization is much narrower than people are making it out to be. It is indeed a precarious path to legalization that will leave many people behind,’ said Pedro Sosa of AFSC’s Portland, OR, immigrant rights program. ‘In fact, many commonplace situations—such as a period greater than 60 days of unemployment during the 10-year provisional period—will make an immigrant ineligible for legal permanent residency.

"‘Making the highly flawed E-Verify system a requirement for all employers is only a recipe for further exploitation and marginalization of immigrant workers and people of color,’ he said.

"Jasso noted that the bill’s original provisions for border militarization and other enforcement programs were ‘already excessive. And despite hearing directly from these communities about the impacts of living in an area dominated by militarization, the Senate doubled down on these measures, failing to consider the humane, meaningful, and effective reforms that are so desperately needed.’"

The House of Representatives is expected to pick up the bill after the early July recess. The Maryknoll Office for Global Concerns agrees with AFSC’s principles for compassionate, effective immigration reform:

Photo from April 10, 2013 rally for immigrants' rights at U.S. Capitol