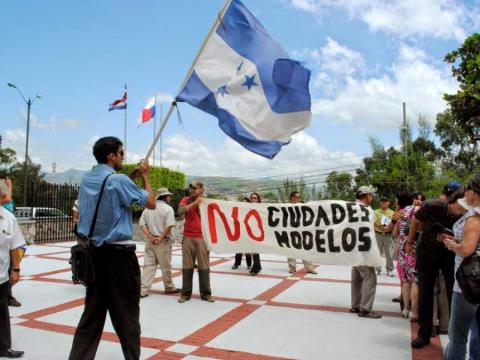 The following article was written by Marek Cabrera, an intern with the Maryknoll Office for Global Concerns, and published in the January-February 2015 NewsNotes.

In Honduras, one of the poorest countries in the hemisphere, the government is in the midst of launching a radical neoliberal economic experiment that, aside from being highly unlikely to reduce poverty or inequality, or spur a kind of development that benefits people who are poor, constitutes a major violation of the rights of the Honduran people. Called Zones for Economic Development and Employment (ZEDEs), the project "represent[s] a significant expansion of free trade zones in that they facilitate the creation of autonomous privatized city-states designed to exist independently from the legal, administrative and social systems of the Honduran state. They are investor-friendly enclaves governed by their own laws, courts and tax systems," according to the recent Report of the National Lawyers Guild (NLG) Delegation Investigation of ZEDEs in Honduras.

The government’s previous attempt to pass a similar law in 2012 was found to be unconstitutional by the country’s Constitutional Chamber of the Supreme Court, a ruling that prompted the dismissal of the presiding judges by the Honduran Congress. That paved the way for the current government, in power since the 2009 coup against the democratically-elected President Manuel Zelaya, to pass the radical ZEDEs law in 2013 that includes several deeply troubling features. As the report states, the ZEDEs law "enable[s] the corporate entities, organizations and individuals who will fund and participate in the zones to structure the social organization itself. This process includes the content of laws, the tax structure, educational, labor and health care system, security forces and other basic elements typically managed by the state." This is not only an extreme liberalization of economic activity but also an example of a government giving up its responsibilities to its population.

Many basic rights of the Honduran population will not be protected within the borders of the ZEDEs, or "model cities" as those areas of the country are being referred to, including: the right to habeas corpus; the inviolability of a right to life; guarantees of human dignity and bodily integrity; guarantee against the extraction of forced labor; freedom of expression; protections for a free press; freedom of religion; guarantees of assembly and association; freedom of movement; the right to a defense, to court access, and to counsel for indigents; and freedom from non-legal detainment.

Furthermore, the ZEDEs will be imposed on unwilling communities throughout the country. Even though the law provides for consultation in more densely populated areas, in others where, according to the Honduran National Statistics Institute, the population density for a rural area is lower than average, Congress may establish a ZEDE without a referendum. Two economically important regions around the Gulf of Fonseca and the Caribbean Sea have already been approved without any consultation with the affected communities. Fourteen other areas identified by the government could potentially be converted into ZEDEs throughout Honduras. Such a process will allow the government to decide when to strip Honduran citizens of their right to self-determination through democratic governance. In terms of governance, moreover, the ZEDEs represent an extreme form of undemocratic, private rule. The ZEDE regions will be permanently governed by an unelected committee, which residents have no power to elect or influence. The existing elected authorities in those regions, their official responsibilities and duties, are not even contemplated in the ZEDE law.

As the NLG report mentioned above concludes: "Honduras is in desperate need of economic development, but development policies cannot replicate decades of neoliberal initiatives that have done nothing to alleviate the suffering of the majority of Hondurans, and served only to enrich the country’s economic and political elites. Against this backdrop, the prospect of ZEDEs raises considerable alarm about the future for the hundreds of thousands of Hondurans for whom the government already fails to provide security, stability and basic human needs. The rough contours outlined by the law itself ... will deprive citizens of rights guaranteed by Honduran and international law, and the implementation of these zones threatens to encroach on an even broader range of internationally protected rights. Instead of fulfilling its obligations to care for its citizens, Honduras is relinquishing those duties to international investors who are focused on increasing profits, not providing for economic and personal security. The international community must monitor for a potential human rights disaster created when the Honduran government privatizes the state functions that serve as its core organizing principles and obligations."