Guatemala: The violence and the vision 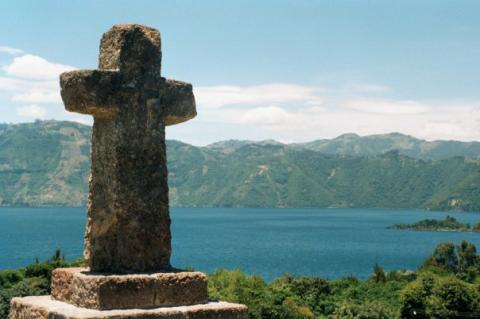 Ann Braudis, MM, recently visited Guatemala in Central America, for the main purpose of helping out for a few weeks at the Maryknoll Sisters Contemplative Community in the village of Lemoa, Department of El Quiche, among the Quiche Mayans. This simple intention soon became a threshold leading to a deeply felt connection to the people of Guatemala in their long struggle for social justice and human rights. This article, published in the May-June 2015 NewsNotes, relates something of this struggle during recent decades: it reflects on where the majority of indigenous and poor people find themselves today.

On February 21, Julia Esquivel, poet and eloquent witness to the suffering of the oppressed people of Guatemala, was the guest speaker for the local Maryknoll Affiliate Chapter, gathered at the Maryknoll Society Residence in Guatemala City. All Maryknollers and friends of Maryknoll were welcome at this meeting.

Esquivel shared the large strokes of her faith journey as a Presbyterian lay woman, starting as a young observer of injustice and finally recognizing her personal call in the image of Jesus pouring out his life for the sake of others. The path of her own self-emptying has been through the public testimony of her poetry which has become the voice of sister and brother Guatemalans denied justice and human dignity. As a consequence, she endured long years of harassment and forced exile from her beloved homeland.

Beyond the account of her personal journey, she summarized the political events of the 1950s. At that time, Guatemala had a democratically elected government committed to civil and human rights, and to economic reform rooted in fairness. Unfortunately, in Washington D.C., within the Eisenhower administration, these measures were interpreted as communist inspired. It was feared that if the reforms being enacted were successful, they would likely impact other Central American states, weakening U.S. hegemony in the area. Clearly, the interests and influence of U.S. companies located in Central America would be affected. The United Fruit Company, which had major advocates in Washington, was chief among these companies. The upshot of this was a U.S.-supported military coup overthrowing the elected government and backing a military regime favorable to U.S. interests. Thus began almost 40 years of brutal civil war with extensive military assistance, training and advice furnished by the U.S. until 1977, when human rights abuses could be ignored no longer.

Lastly, Esquivel linked what happened in the past to present day violence, corruption and the ongoing concentration of wealth in the hands of a fraction of the population. She pointed to the continued failure to recognize the rights of the indigenous people and the lack of economic opportunity for poor people in general. She drew attention to the Central American Free Trade Agreement (CAFTA), and the [March 2015] visit of U.S. Vice President Joe Biden who unveiled a new aid package related to curtailing the migration of undocumented people to the U.S. She asked these difficult questions: Whose interests are being served and who will profit from this agreement and this package? (See “Biden’s solution to Central American migration overlooks CAFTA damage” by Jeff Abbot, Truthout, March 18, 2015)

Lemoa is a village three hours northwest of Guatemala City. It is home to Quiche Mayans and situated on a high ridge in the Sierra Madre Mountains. It lies just above a small lake called Mirror Waters. It is because of the clear lake waters that the Mayans settled in this place.

The rooms occupied by the sisters for their living quarters are part of a catechetical center attached to the parish church. The exterior walls of these rooms are white-washed. This is good but does not cover up entirely a certain darkness caused by the fact that this same space was used as a torture center against the local people during the violence. What happened there is unspeakable. Many of the adult population of Lemoa and the entire mountain region carry terrible memories of the atrocities committed against them and their loved ones. To hear their stories is to feel broken hearted. (See: “The Echo of the Pain of the Many,” Armadillo Productions.)

At the edge of the village a cemetery holds the remains of 27 women and men massacred in 1981. Their tortured bodies were tossed into a gully where they remained for 10 years before being discovered. In this place of sorrow it is hard to integrate feelings of sadness and outrage with a sense of hope that the lives of these martyred men and women may issue forth in a better humanity.

One afternoon, Diego Gonzalez Osorio, a man from a nearby community visited the Sisters. His story is shattering. Age 53 now, he was 17 when his village was destroyed. Men, women, and children were savagely murdered. Unborn babies were ripped from their mothers’ wombs. All possessions – a typewriter here, a sewing machine there – were destroyed. All the houses and the school were burned to the ground. Some people survived by fleeing into the mountains where they nearly starved.

Referring to the communist threat in Central America, politicians like to speak of the domino effect, but it is in the indigenous villages that the domino effect was truly felt: The violence left no opportunity for the youth to go to school, nor were there any jobs to be found. There was no health care. People were left in tatters, in shock and depression. In spite of the 1996 Peace Accords, to this day there is no restitution for losses sustained due to the official scorched earth policy. The survivors live in hovels and their teenage children dream of escaping to the United States and know the coyotes who will ferry them through Mexico to the U.S. border for a price.

In Diego’s case, he recently sent his daughter to Guatemala City to study at the university; he sent her equipped with a computer. Then, two men on a motorcycle passing her on the street shot her in the leg and grabbed her computer.

According to Diego, there are three kinds of violence in Guatemala today:

For him, the violence of the war years never ended. It merely changed form.

Finally, a word about the Maryknoll Sisters Contemplative Community in Lemoa. Unquestionably, the sisters are intellectuals as well as contemplatives. Daily, through study, they strive to deepen their understanding of what it means to midwife a new interior platform as a basis for shaping human aspirations and for rewiring the human brain to act in alignment with its understandings. This is work that demands immense discipline and a continuous, unflinching resolve to attend to prayer while dwelling in and responding to a very real world of poverty and want. Their driver is Christ-consciousness. From their remote corner of the planet, through the internet, they connect with others around the world who are assuming personal responsibility for evolving a new way of seeing and acting; a way that is commensurate with a vision of humanity that corresponds to the potential to become one earth community in justice and in peace. Their small community is actually a global community. Lastly and above all, in them love is evident; simple human warmth characterizes them.