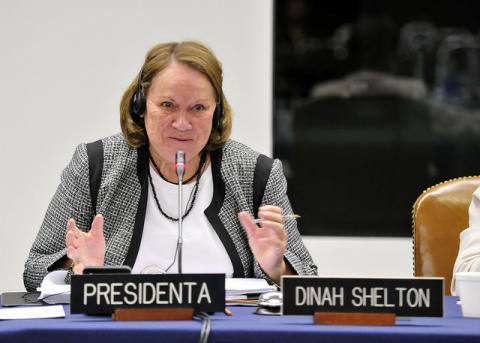 The following article appeared in the September-October 2013 issue of NewsNotes.

On August 24, the Organization of American States’ Inter-American Commission on Human Rights (IACHR) issued a press release expressing deep concern for two children who were shot August 23 in the Guatemalan community of Monte Olivo, along the Dolores River in the department of Alta Verapaz. The alleged shooting suspects were identified as employees of the Santa Rita hydroelectric plant – a project opposed by this mostly indigenous Maya-Q’eqchi’ community. The children were the latest victims in a rash of human rights abuses directed at indigenous people who oppose the exploitation of natural resources on community lands.

The shooting took place on the day that Dinah Shelton, IACHR Rapporteur on the Rights of Indigenous Peoples, was conducting an on-site visit in Cobán, Guatemala – just 50 kilometers (about 31 miles) south of Monte Olivo. The purpose of her visit was to gather information about the human rights situation of indigenous peoples, with special focus on their lands, territories, and natural resources, and the right to prior, free and informed consultation.

IACHR delegation members who went to Monte Olivo after the attack report that the two indigenous children, aged 9 and 13, were shot while playing marbles. Members of the Rapporteur’s delegation visited the Regional Hospital of Cobán to find that the 9-year-old sustained a high caliber shot in the skull and was in serious condition. The 13-year-old sustained two gunshot wounds, one of which damaged his trachea. (Tragically, both children have died since the visit.)

While interviewing members of the community, the IACHR team found that the alleged perpetrators had visited the home of a community member known for his opposition to the hydroelectric plant, but were told that he was in Cobán for a meeting with the IACHR Rapporteur.

It took over an hour for an ambulance to arrive from Cobán to take the children to the nearest hospital – which was not equipped to deal with the 9-year-old’s critical condition. Health care resources are lacking in Monte Olivo. Doctors working on the children reported to ICHR delegation members that the 9-year-old needed urgent transportation to Guatemala City, but the hospital’s only ambulance was broken down.

In the press release, the IACHR urges Guatemala to guarantee human and material resources necessary to ensure integral and culturally-appropriate medical attention for the two children at the Regional Hospital of Cobán. It also pressed the state to take urgent action to ensure that regional hospitals like this one be equipped with ambulances to address emergencies in the future.

The Inter-American Commission also stated that it "understands that the lack of confidence of this indigenous community in the State’s security forces is related to a longstanding high level of impunity." And the IACHR called on the Guatemalan authorities to work with the community of Monte Olivo to establish effective mechanisms to guarantee that the material and intellectual authors face justice, safeguarding at all times the rights and integrity of the community and its members.

Above all, IACHR special rapporteur Shelton expressed that the circumstances and timing of this attack raise concern that members of indigenous communities who have spoken with her during her August 21-30 visit may later experience intimidation or retaliatory actions by elements within society. Shelton states in the press release: "It is deeply worrying that a tragedy like this took place during the visit, with our presence in the area. We will be closely monitoring the actions to be adopted with great attention."