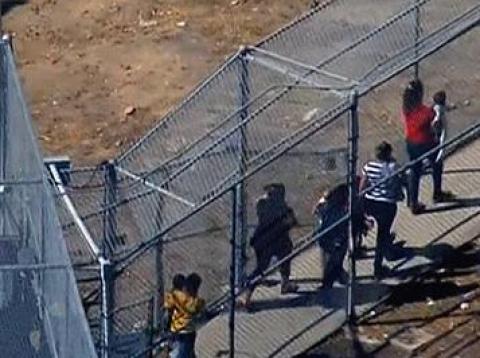 In April, nearly 1,000 activists joined in the annual Ecumenical Advocacy Days (EAD); this year’s theme was “Breaking the chains: Mass incarceration and systems of exploitation.” As in previous years, participants spent a day visiting their members of Congress to urge support of specific legislation. The 2015 EAD “ask” was: Reform federal criminal justice and immigrant detention policies toward the goal of ending unfair, unnecessary, costly and racially biased mass incarceration: 1) Adopt criminal justice and sentencing reform policies that incorporate an end to mandatory minimum sentencing; and 2) Eliminate the detention bed quota for immigrants and implement alternatives to immigrant detention.

On the issue of the detention bed quota, EAD participants shared the following information with their members of Congress. We invite you to use similar language when you contact your senators and representative.

The U.S. has the largest immigration detention infrastructure in the world. The expansion of this system in recent years is partly due to the immigration detention bed quota, policy passed by Congress under which 34,000 immigrants are held in ICE detention at any given time: “. . . funding made available under this heading shall maintain a level of not less than 34,000 detention beds.” This policy is unprecedented; no other law enforcement agency operates on a quota system. Many detained people are seeking protection from persecution, sexual assault, trafficking, and violence. The bed quota is a particularly egregious element of the immigrant detention system.

The quota feeds into a larger system characterized by mass deportation and lack of due process. It incentivizes targeting immigrants for deportation in order to fill jail cells to the profit of corporations and localities.

Immigrant detention can be replaced by other proven and effective methods—including parole, release  under supervision, and bond. All of these alternatives, when needed, can help ensure people participate in their court proceedings, are more humane and cost taxpayers far less than detention.

Detention is expensive – there is a human cost to our communities and a monetary cost to taxpayers. The administration’s rampant detention and deportation policies mean each year nearly half a million people are torn apart from their families and communities. The most recent budget request for ICE’s Custody Operations is just over $2 billion. During a time of fiscal challenge, it is unacceptable to be spending billions of taxpayer dollars to needlessly detain immigrants.

For members of the House, Reps. Ted Deutch (D-FL) and Bill Foster (D-IL) will introduce an amendment to strike the quota language in the appropriations bill. Members of the U.S. House of Representatives are asked to: 1) Vote in favor of the Deutch-Foster amendment; 2) Contact other offices to gain support for the elimination of the quota; and 3) Express opposition to the bed quota in public statements.