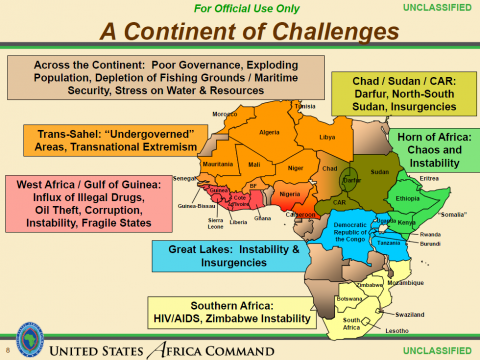 At its April 2015 meeting, in light of President Obama’s summer trip to East Africa, the Washington, D.C.-based Advocacy Network for Africa (ADNA), of which the Maryknoll Office for Global Concerns is a member, adopted a final draft of a statement on several important U.S./Africa policy issues. ADNA raises awareness about Africa among members of Congress and attempts to increase the flow of dependable and timely action-oriented information among advocacy groups in the U.S. Below is ADNA’s stance on the militarization of U.S. policy towards Africa.

… While we support the quest for transnational shared security with and for all African peoples, we are opposed to the Western focus on building larger, more politically powerful, technologically-equipped, and expensive militaries in African countries. This reflects a policy based on a belief – and on a habit – that military solutions are the first step toward peace. Military responses to conflict and contestation are often counter-productive in the long term and result in gross violations of human rights and deaths of civilians.

The introduction of the philosophy and strategy of the Global War on Terror (or “overseas contingency operations”) into Africa with aggressive militarization has not and will not facilitate peace and will continue to contribute to human rights violations.

The policy of the “whole of government” approach to combine State Department, USAID, and Department of Defense (DOD) policy and planning is a mistake to the extent that it erases the important differences between traditional policy-making by the civilian arm of the executive branch (such as the Department of State and USAID) and the implementation of a security-focused military policy, driven by DOD. We are especially disturbed at the explosive growth of the DOD in policy assessment and policy-making, through the relative numbers of U.S. military personnel representing the U.S. in Africa, in the militarization of the programs of the Department of State and USAID, and in the apparent decline of the role, influence, and resources of the State Department and USAID.

In order to conduct U.S. Africa Command (AFRICOM) counterterrorism operations during the War on Terror, the U.S. has recruited African allies – Kenya, Uganda, Burundi, Dijbouti and Ethiopia in the war against Somalia’s Al-Shabaab, and Niger and Burkina Faso in the war against Al-Qaeda in the Maghreb (AQIM) – leading the U.S. to not demand accountability and instead overlook the human rights violations of their partner countries, such as torture, arbitrary arrest, and restriction of freedom of expression. In addition, the U.S. has even been implicated in participating in unlawful activities, such as colluding with the governments of Kenya, Uganda, Ethiopia, and Somalia to maintain a secret detention program, all in the name of countering terrorism.

We are deeply troubled by these broad and hidden security engagements which are happening in dozens of African countries without any opportunity for public policy debate about the targets of the attacks, or the nature of their actions. Before continuing on this path there should be space for broader reflection on both the collateral civilian damage, the license to take action without public accountability, and the wisdom and effectiveness of a military suppression of dissidence.

We are especially concerned that the strategies of aerial attacks since 2007 in Somalia and potentially now in the rest of the Sahel Region – by C-130 Hercules gunships, attack helicopters, cruise missiles, and now by drones from the four bases in Africa and from Europe – can be a source of mounting collateral deaths of civilians and blowback in facilitating the recruitment of new militants. The impending permanent base near Seville, Spain, under the control of the U.S. Africa Command, is an additional worrying expansion of U.S. offensive security policy.

We advocate more U.S. support and resources for human rights, conflict resolution, and negotiation in Africa in order to develop long-term peace based on the often difficult agreements among different legitimate stakeholders, including the many varieties of Islamic and Islamist organizations across Africa. With this emphasis on conflict resolution, additional funds are needed for economic development activities in health, education, housing, and infrastructure as incentives for conflicting groups to come to the table and to begin to build cooperation across lines of conflict for the reconstruction of disrupted civil society. …

Graphic shows a slideshow from an AFRICOM organizing presentation