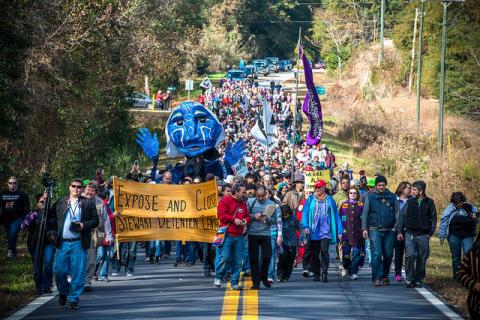 The following article appeared in the January-February 2015 NewsNotes.

On November 21-23, over 2,000 people gathered at the gates of Ft. Benning in Columbus, GA to commemorate the 25th anniversary of the murders of six Jesuits, their housekeeper and her daughter at the Universidad Centroamericana (University of Central America, UCA) in El Salvador. Those responsible for the massacre were military leaders who had trained at the U.S. Army School of the Americas (SOA), located at Ft. Benning; the program has been re-named the Western Hemisphere Institute for Security Cooperation (WHINSEC).

As in recent years, participants in the 2014 SOA vigil also joined in the "Shut Down Stewart Detention Center" action, held on November 22 in nearby Lumpkin, GA.

Corrections Corporations of America (CCA), the largest for-profit prison company in the U.S., is the owner of the Stewart Detention Center, which houses 1,800 undocumented migrants held, by all accounts other than those of ICE and CCA, in inhumane conditions.

According to SOA Watch, "This is not a coincidence in the private prison industry. CCA makes more money by cutting on detainee medical services, food, amenities, recreation, as well as employee training and benefits. Not only does CCA profit from incarcerating migrants, but it also profits by forcing them to endure horrendous conditions such as those inside Stewart."

CCA "pays" the detained migrants $1-3 a day to clean and maintain the facility. SOA Watch notes, "Stewart detainees and other migrants around the country are criminalized for working without authorization in the U.S., arrested, deprived of their freedom, and then paid slave wages in prison for the profit of CCA."

So many migrants are deported from Stewart Detention Center that it has its own immigration court. Three judges decide whether to release Stewart detainees on bond before they ultimately decide whether they are allowed to stay in the country; records indicate that three percent of the detainees are released on bond while 83 percent are deported. According to SOA Watch, one of the Stewart judge, Dan Trimble, is now on the Board of Visitors of the SOA/WHINSEC. "A judge who regularly denies bond … and orders the deportation of migrants inside one of the worst immigrant detention centers in the U.S. is also a public supporter and board member of another heinous institution 40 miles away. The [graduates of] SOA/WHINSEC have inflicted so much death and destruction on the people of Latin America, maintaining and exacerbating the social and economic conditions that force many Latin Americans to become migrants in search of a peaceful life. Some of them end up in Stewart, perhaps after being racially profiled and arrested for driving without a license. And some of them are then ordered deported by Judge Trimble."

Like members of the movement to close the SOA/WHINSEC, immigrants and allies will continue to protest and bear witness at Stewart until it is closed. In Columbus, in Lumpkin, and across the continent, the solidarity movement will continue to make clear that the lives of migrants, the lives of Latin Americans, and the lives of their families and loved ones matter.

Photo of procession to Stewart Detention Center by Steve Pavey